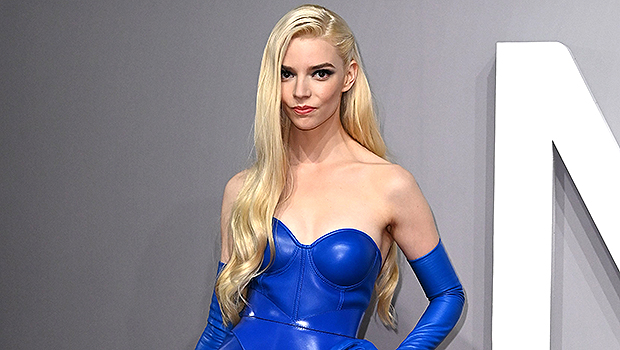 Anya Taylor-Joy looked absolutely breathtaking at the Wednesday, Nov. 9 London premiere of her upcoming horror film, The Menu. The 26-year-old Golden Globe-winning actress donned a bright blue Alexander McQueen latex dress that featured a sweetheart neckline and an asymmetric fit-and-flare design. As seen in the below photo, Anya debuted a new and very lengthy hair look, which cascaded beautifully down her right side, complimenting the longer side of her dress.

The British star wore her gorgeous platinum blonde hair in loose curls and clipped it back on the left. Her lengthy locks are a new addition to the star’s appearance, who previously rocked a short ‘do, as seen in the image below. Anya finished her jaw-dropping look with black Christian Louboutin heels and matching latex gloves.

Anya was joined by her co-star, 32-year-old actor Nicholas Hoult, on the red carpet. The British model and actor looked dapper in black slacks and a velvet purple dress coat. He wore a magenta button-down underneath the blazer and paired it with a black tie and black dress shoes.

Anya, who gained widespread notoriety after starring in 2020’s The Queen’s Gambit, was cast in the Mark Mylod-directed film in July 2021. The film is a “darkly comedic psychological thriller set in the world of eccentric culinary culture, centering on a young couple who visit an exclusive restaurant on a remote island where an acclaimed chef has prepared a lavish tasting menu,” according to Deadline. Anya and Nicholas play the couple on the thrilling date, while Ralph Fiennes portrays the chef.

“Just putting it out there, getting to spend months on a dinner date with Nick Hoult was awesome,” Anya raved to Vogue Australia in a Sept. 2022 interview.

Before her Vogue interview, she teased The Menu on her Instagram page by sharing a movie poster for it, on which she rocked a reddish-brown hair color. “This one has teeth,” she wrote in the caption. “Can’t wait to share it with everyone, we truly had a scrumptious time.” In June, she said the movie is “going to be fun” for viewers to consume.

Anya Taylor-Joy’s Husband: Everything To Know About Malcolm McRae

The Menu is Anya’s fourth release of 2022, following the October premiere of Amsterdam. She has The Super Mario Bros. Movie coming out in 2023 and Furiosa slated for 2024, per IMDb, and is set to start filming two new projects. Despite her seemingly solid schedule, Anya told Vogue she’s not sure where she’ll end up next in terms of acting gigs. “I want to be in situations that make me feel really alive and very lucky to be exactly where I am,” she explained. “Hopefully, people will keep inviting me along for the ride, because I do love it.”