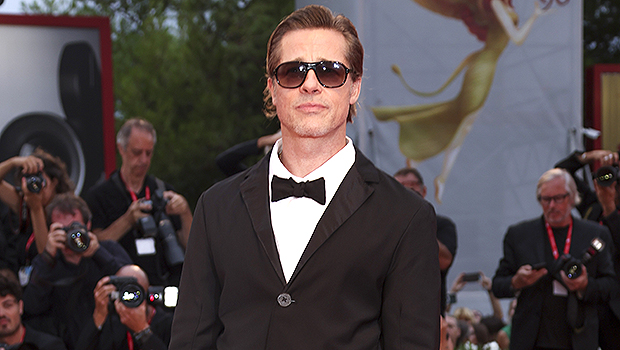 Brad Pitt, 58, rocked a pair sneakers at the premiere of movie Blonde during the Venice International Film Festival on Sept. 8. The Oscar-winner proved that he only gets cooler with age as he stepped out in pair of Adidas Gazelle sneakers for the black tie event. The Bullet Train star went in full black tie mode for the rest of his ensemble, looking handsome as ever in a classic tuxedo with a looser, more relaxed fit. He also wore his blonde locks slicked back and sported a slight stubble of facial hair for the event. Finally, he topped the outfit off with a pair of brown sunglasses to keep his eyes protected from the sun and camera flashes.

Just one day prior, Brad proved that casual was the theme of the week with rainbow sneakers, burgundy sweatpants, and a t-shirt. The comfortable and classic looks come just over a month after Brad sported a stylish skirt at the premiere of the movie Bullet Train, while in Berlin on July 19. More recently on Aug. 19, Brad hit the red carpet in a sexy hot pink suit for the movie’s premiere in South Korea.

Blonde is an upcoming Netflix movie that takes a look at the life of the late film star, Marilyn Monroe, who is played by Ana de Armas, 34. Although Brad does not star in the film — which is set to hit select theatres in the United States on Sept. 16 — he is a producer on the project. Other producers joining Brad include Dede Gardner, Jeremy Kleiner, Tracey Landon, Scott Robertson, and Christina Oh as executive producer.

The movie’s leading lady, Ana, also looked glorious on the red carpet next to Brad in a flowing pink gown. Both actors posed together on the red carpet that Thursday to celebrate the film’s initial release. Ana wore a floor-length pink gown, channeling Marilyn with a retro look. She was also dripping in diamonds with a statement diamond choker and bracelet. The Deep Water actress also wore her beautiful brunette tresses in classic Hollywood curls to emulate Marilyn’s famous look. Netflix’s, Blonde, also stars Adrien Brody, Xavier Samuel, Bobby Cannavale, Sara Paxton, and more. Although Blonde will hit select theatres next Friday, it will also have a global streaming release on Netflix on Sept. 28.

Damien Chazelle’s ‘Babylon’ Movie: The Cast, What To Expect & Everything Else We Know