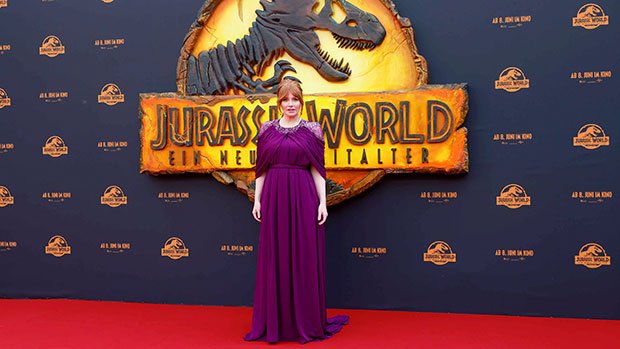 Bryce Dallas Howard was all aglow during the premiere of Jurassic World Dominion at Medienpark in Cologne, Germany on Sunday, May 30. The actress looked radiant wearing a plum dress with beautiful beading and a capelike back for the screening, ahead of the movie’s June 10 release.

Bryce looked like a true movie star in her purple look, which elegantly gathered around her shoulders, cinched at the waist, and featured sparkling gems atop sheer shoulders. The daughter of director Ron Howard had her red tresses piled into a chic updo, with touches of fringe framing her glowing face along with drop earrings with purple and blue gemstones.

Also at the event were co-stars Jeff Goldblum and DeWanda Wise. Jeff was cool as can be in leather pants and a matching jacket worn over a graphic-print button-up and striped tie. Meanwhile, DeWanda was radiant in a white ruffled number that had a slit that let sparkling silver pants peek through. Making the event a night on the town, DeWanda brought along handsome husband Alano Miller as her date for the evening.

Fans of the old and the new Jurassic Park movies are eager for Jurassic Park Dominion, which takes place four years after the destruction of the prehistoric predator-filled island of Isla Nublar. Now that dinosaurs live and hunt alongside humans all over the world, human beings are forced to rethink where they stand in the food chain. The flick also sees the return of Chris Pratt as dino trainer Owen Grady. Sam Neill and Laura Dern, who were both in the 1993 original, also star in the movie.

Bryce praised Chris during an interview with Entertainment Tonight. Talking up her on-screen partner she said, “Chris is someone who I respect and admire and who I have a blast with, and we’re just very compatible. Getting to have a friend like [that] in my life is absolutely amazing. And that doesn’t go away, which is good.”