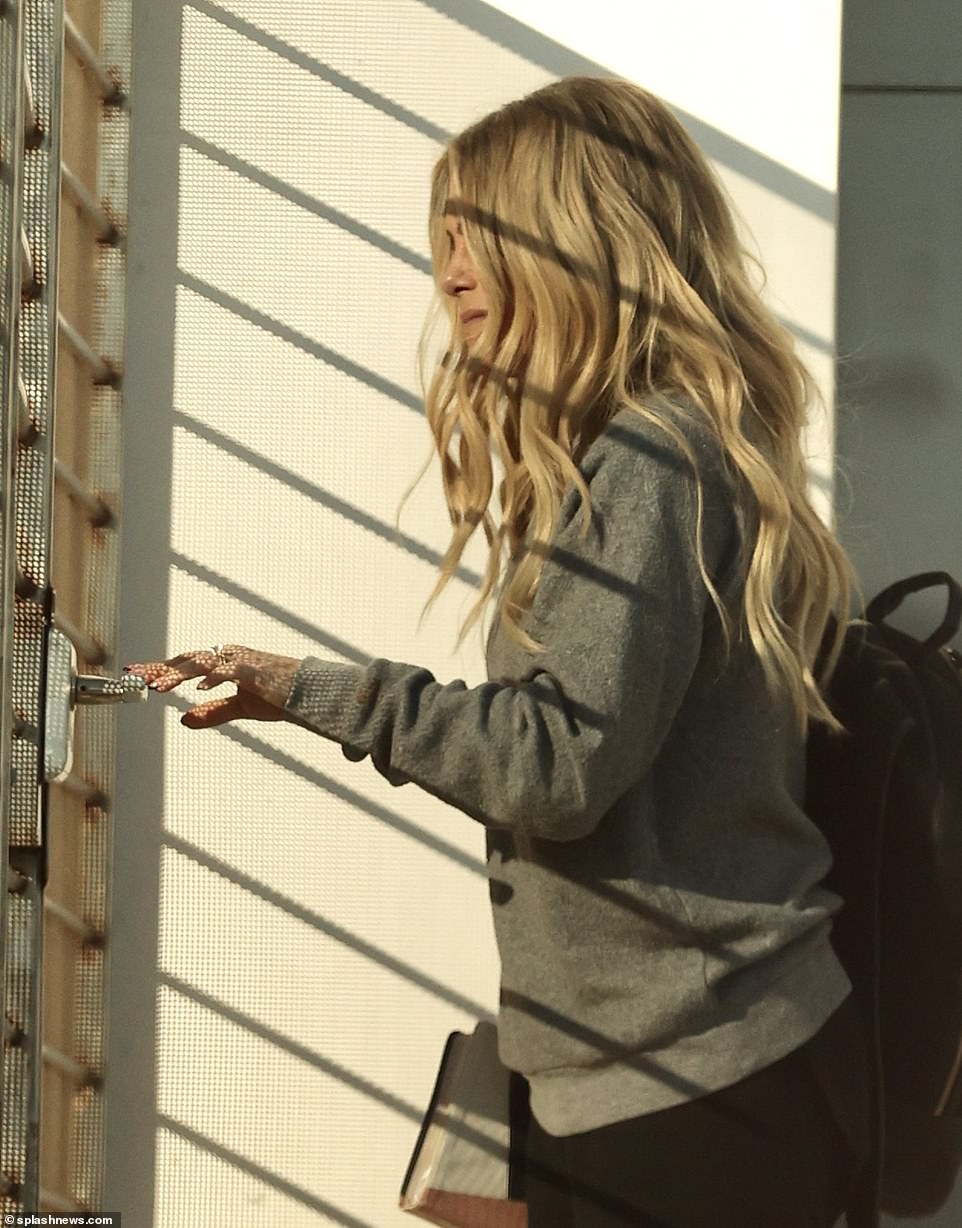 Candace Cameron Bure has been pictured for the first time since sparking controversy for saying the Christian network she is now employed by will be focusing on ‘traditional marriage’ rather than same-sex couples in their programming.

The Full House actress, 46, was spotted in Los Angeles on Tuesday amid backlash over an interview she did with the Wall Street Journal where she anticipated her new TV network – Great American Family – would not be featuring gay couples in lead roles, unlike the Hallmark Channel.

Candace – who kept a low profile as she stepped out wearing a grey sweatshirt, black trousers, and stylish sneakers – announced she would be leaving the Hallmark Channel back in April, two years after the network released its first LGBTQ holiday movie with a gay lead couple.

Landing herself in hot water, this week Candace explained that she wanted ‘tell stories that have more meaning’ now that she is working with the Great American Family network, a cable television network founded in 1995, that was originally a country music channel.

Controversy: Candace Cameron Bure was pictured in Los Angeles on Tuesday after coming under fire for her ‘traditional marriage’ comments

In April this year, Candace revealed she was moving to the network, because it was a better fit to her ‘brand.’

‘I am constantly looking for ways that I can inspire people to live life with purpose. GAC fits my brand perfectly; we share a vision of creating compelling wholesome content for an audience who wants to watch programming for and with the whole family,’ she wrote.

However, the actress was then slammed when she confirmed this week that she did not expect the network to feature same-sex couples in starring roles. ‘I think that Great American Family will keep traditional marriage at the core,’ she said.

Backlash: Bure landed in major hot water after telling the WSJ that she anticipated her new TV network would not be featuring same-sex couples in starring roles 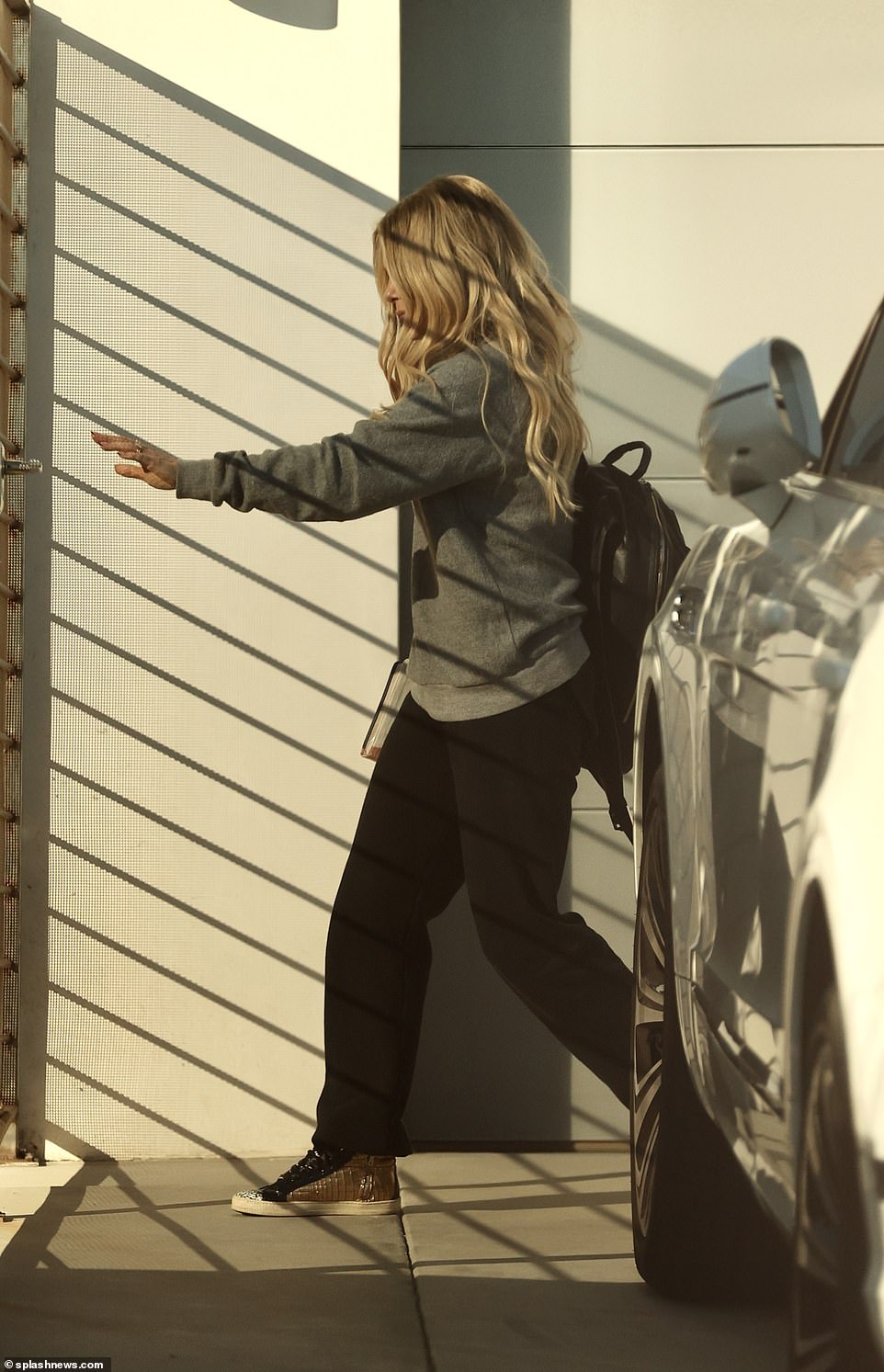 On the go: The Full House vet teamed her look with a pair of glossy sneakers

The backlash came in from all corners of the Internet, with celebrities and the Twitterverse slamming Bure for the comments.

GLAAD released a statement condemning the comments and advising potential partners of the network to reconsider associating with Great American Family.

‘It’s irresponsible and hurtful for Candace Cameron Bure to use tradition as a guise for exclusion,’ Sarah Kate Ellis, the CEO and President of GLAAD, said in a statement. ‘I’d love to have a conversation with Bure about my wife, our kids, and our family’s traditions.

Low-key: Candace kept a low profile as she stepped out wearing a grey sweatshirt, black trousers, and stylish sneaker 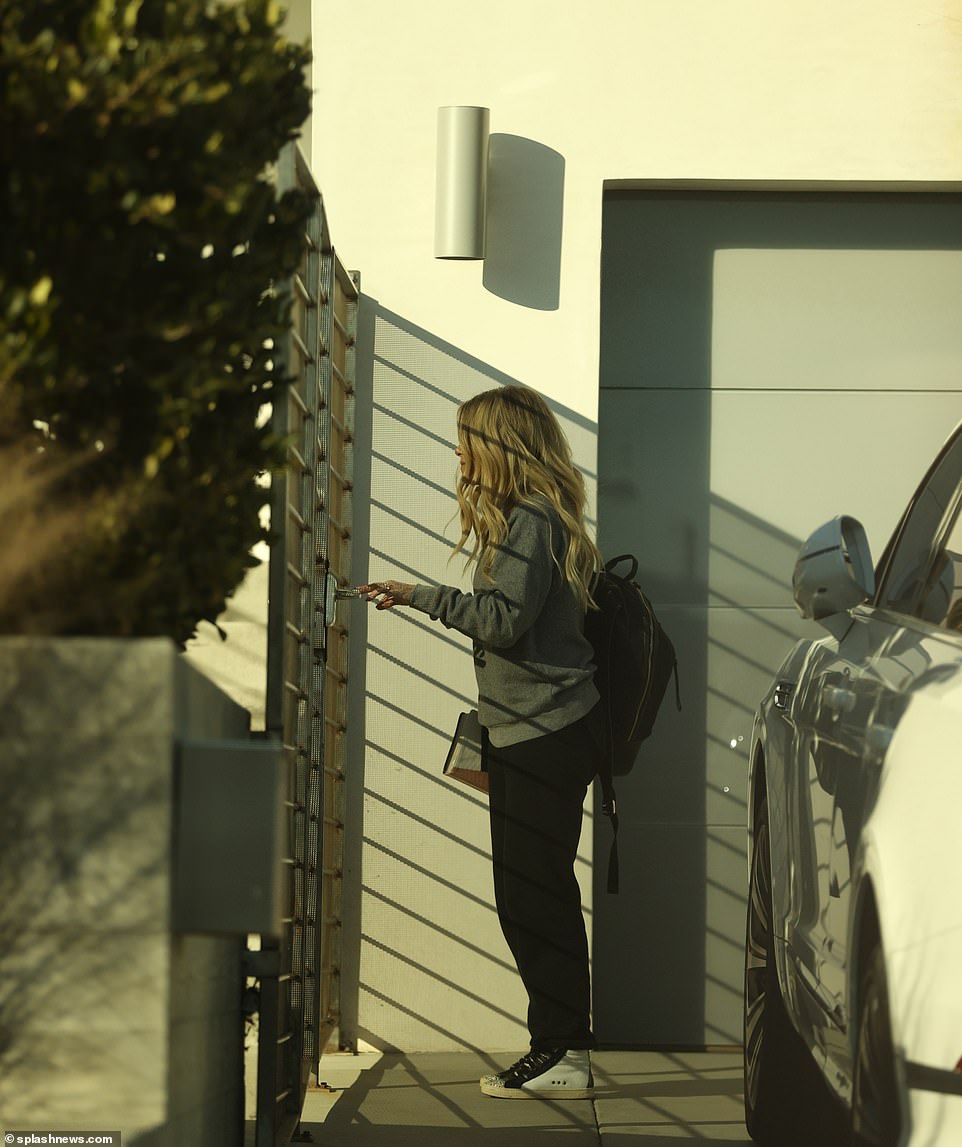 Slammed: Bure told the WSJ she expected GAF not to feature same-sex couples in starring roles. ‘I think that Great American Family will keep traditional marriage at the core,’ she said

‘Bure is out of sync with a growing majority of people of faith, including LGBTQ people of faith, who know that LGBTQ couples and families are deserving of love and visibility. As the company’s Chief Creative Officer, her statement is harmful and insulting to LGBTQ employees, as well as employees with LGBTQ friends and family.

‘If GAC Family’s plan is to intentionally exclude stories about LGBTQ couples, then actors, advertisers, cable and streaming platforms, and production companies should take note and seriously consider whether they want to be associated with a network that holds exclusion as one of its values.’

Bure had long been the star of numerous Hallmark holiday films but recently departed the network for Great American Family, which WSJ described as ‘the God-and-country alternative for holiday entertainment.’ 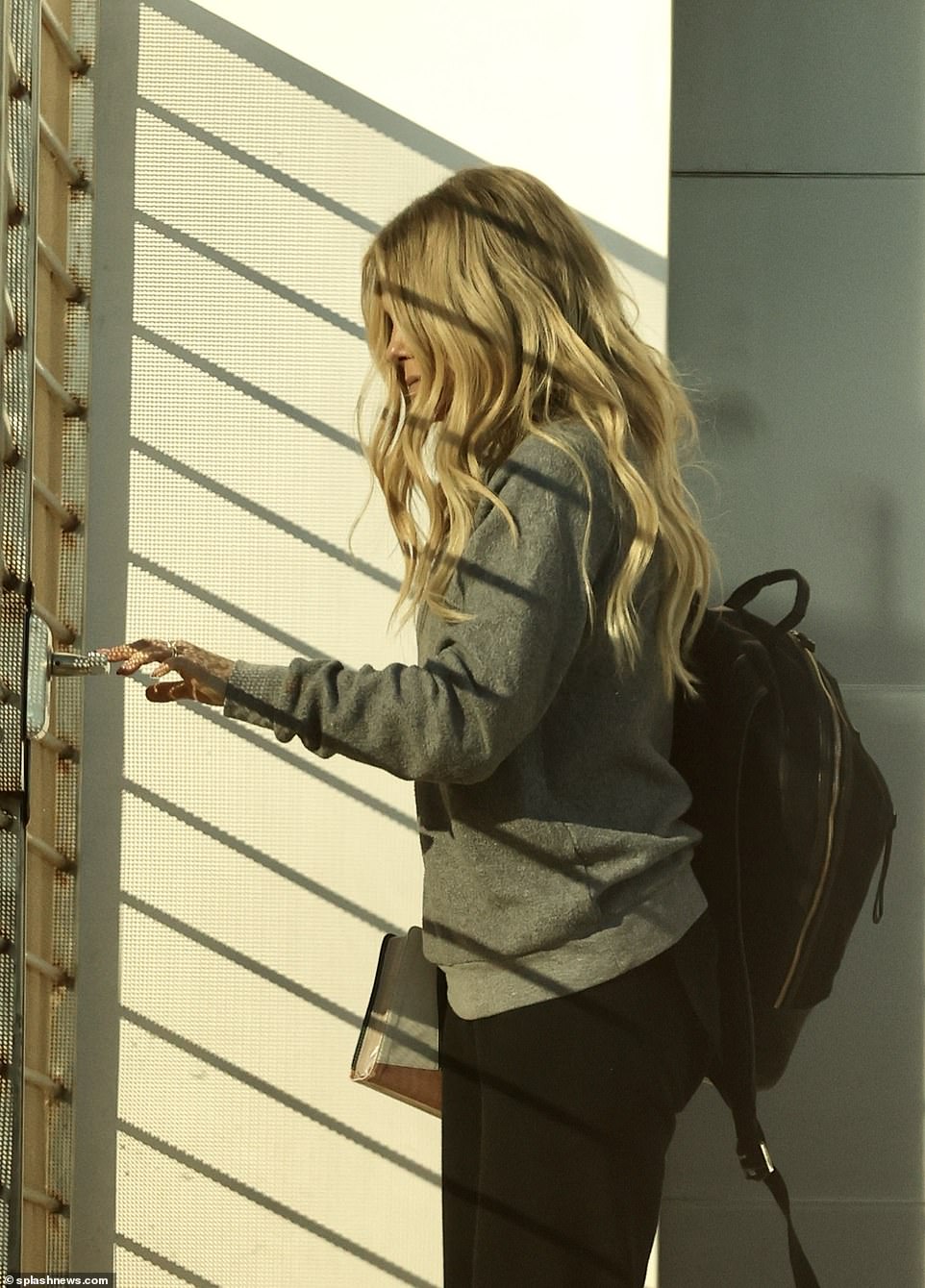 In hot water: The backlash came in from all corners of the Internet, with celebrities and the Twitterverse slamming Bure for the comments 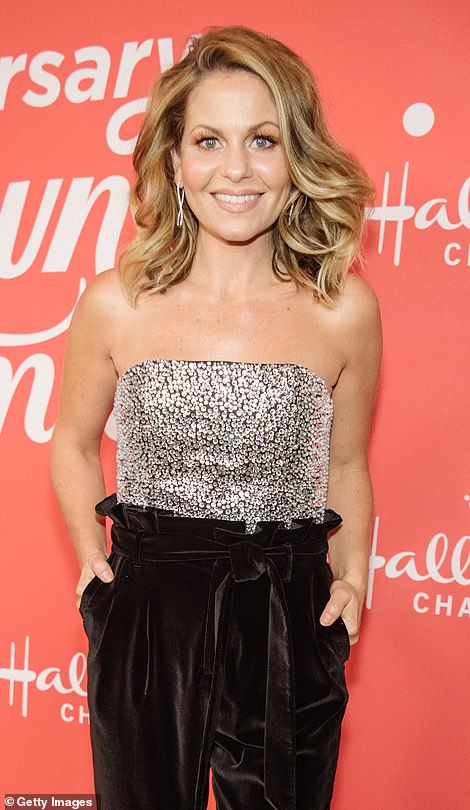 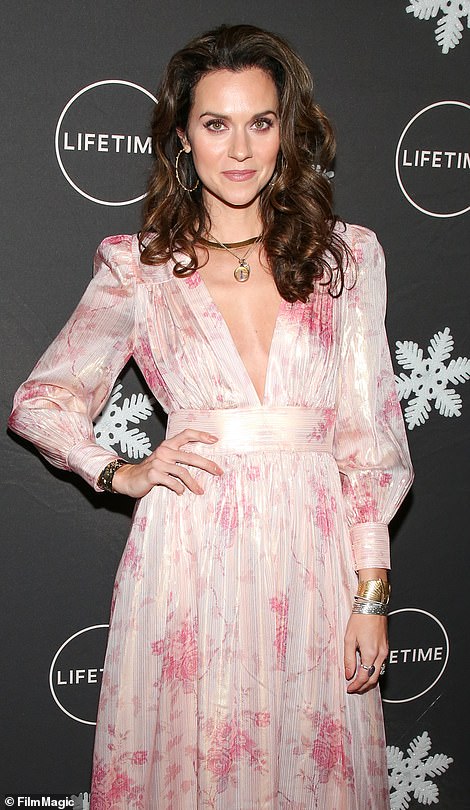 Controversy: Bure has come under fire after saying the new TV network she has joined will not feature same-sex couples in starring roles – with Hilarie Burton calling her a ‘bigot’ 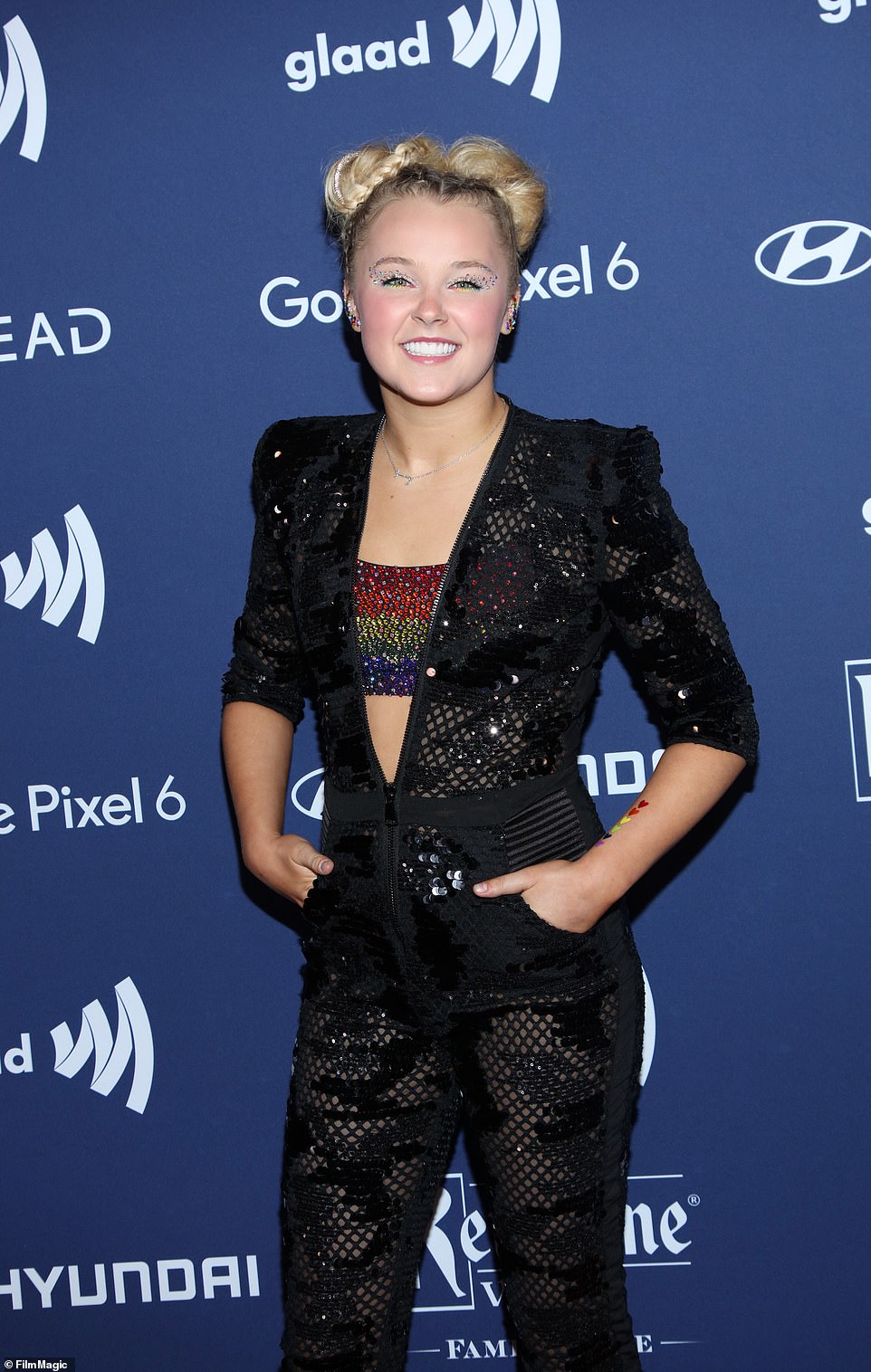 ‘This is rude and hurtful’: JoJo Siwa, who was recently feuding with Bure after calling her the ‘rudest celebrity’ she ever met, also slammed her

‘With a name that conjures red-state pride and content that embraces faith, the channel is presenting itself as the choice for Christians who think Hollywood is ruining Christmas,’ writes WSJ of the network.

Candace said she was yearning to shoot films with ‘more meaning’ and aligned herself with Great American Family due to their vision for faith-based programming.

‘My heart wants to tell stories that have more meaning and purpose and depth behind them. I knew that the people behind Great American Family were Christians that love the Lord and wanted to promote faith programming and good family entertainment,’ she said in the profile.

Bill Abbott, the chief executive at Great American Media who previously held that same role at the parent company of Hallmark Channel, referred to Candace as a ‘key piece in what we’re doing.’ 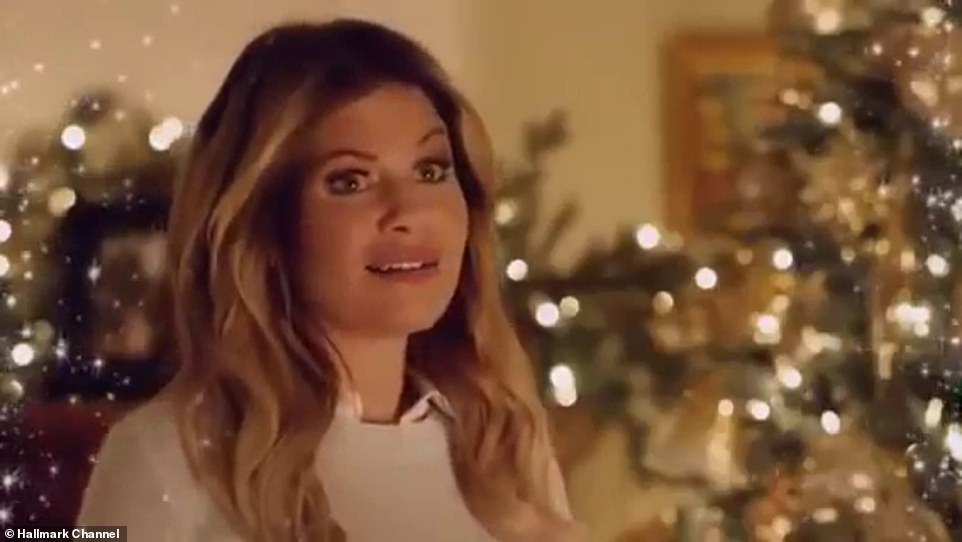 Hallmark staple: Bure, 46, had long been the star of numerous Hallmark holiday films but recently departed the network for Great American Family, which WSJ described as ‘the God-and-country alternative for holiday entertainment’ 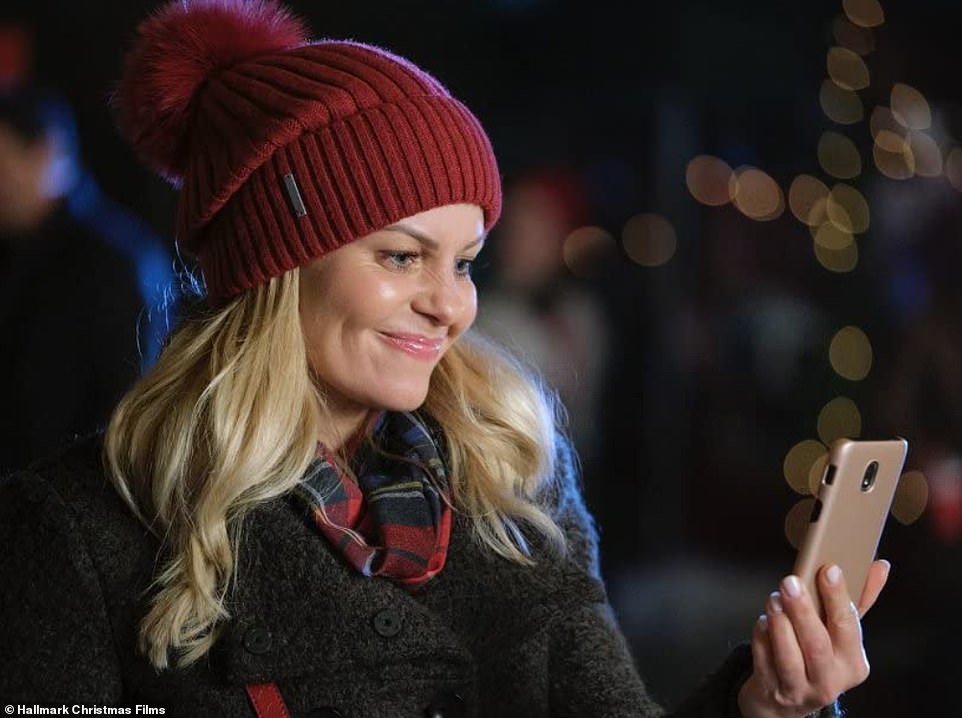 Abbott departed Crown Media Family Networks in early 2020 after the network pulled four ads for wedding planning website Zola which featured a lesbian couple kissing on their wedding day. The ad was reinstated and Hallmark apologized to viewers following a backlash. No explanation was given for his departure.

Speaking of including same-sex couples in Great American Family films, he told WSJ: ‘It’s certainly the year 2022, so we’re aware of the trends.’

Hallmark released its first film with a gay couple prominently featured, The Christmas House, in 2020. 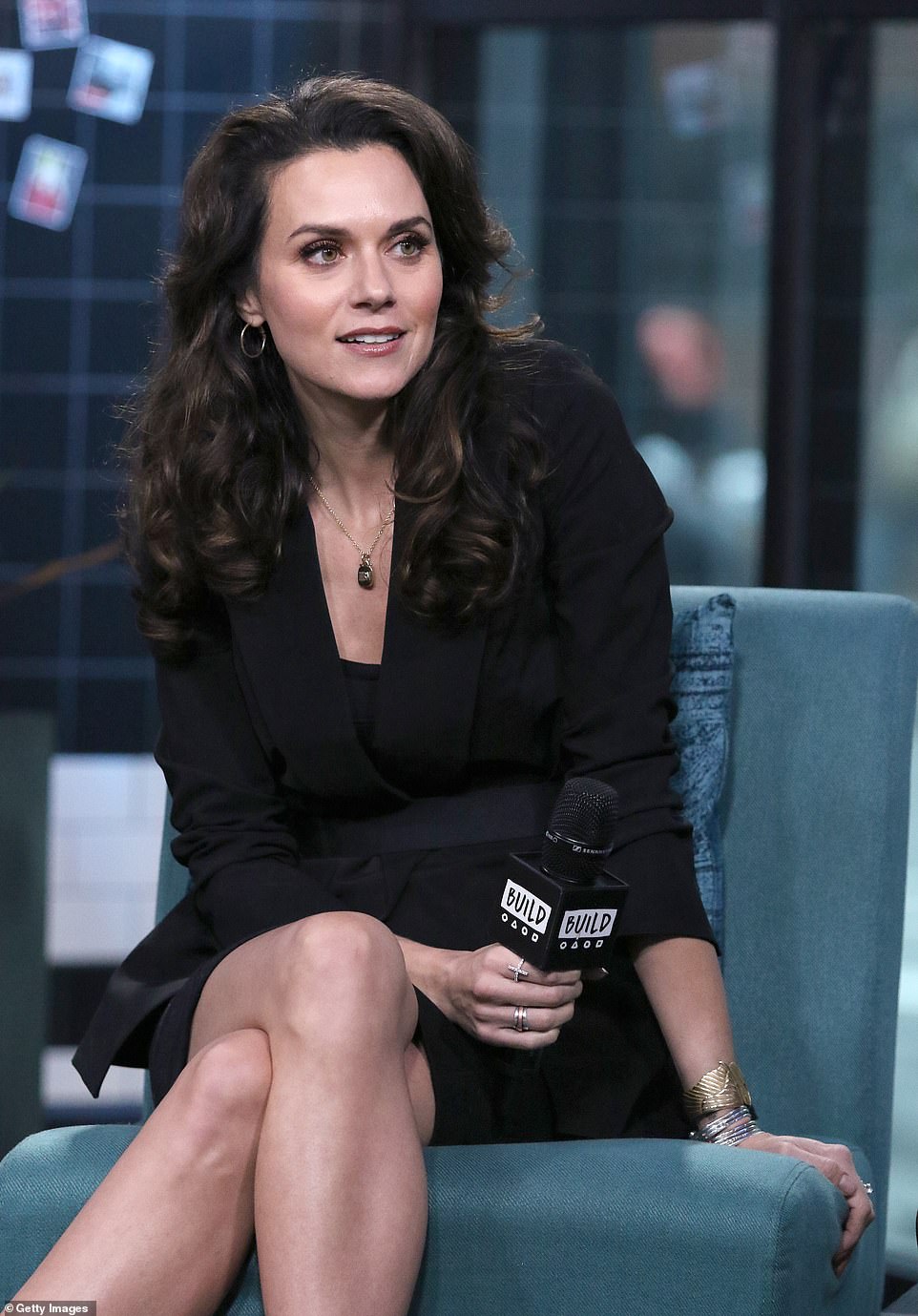 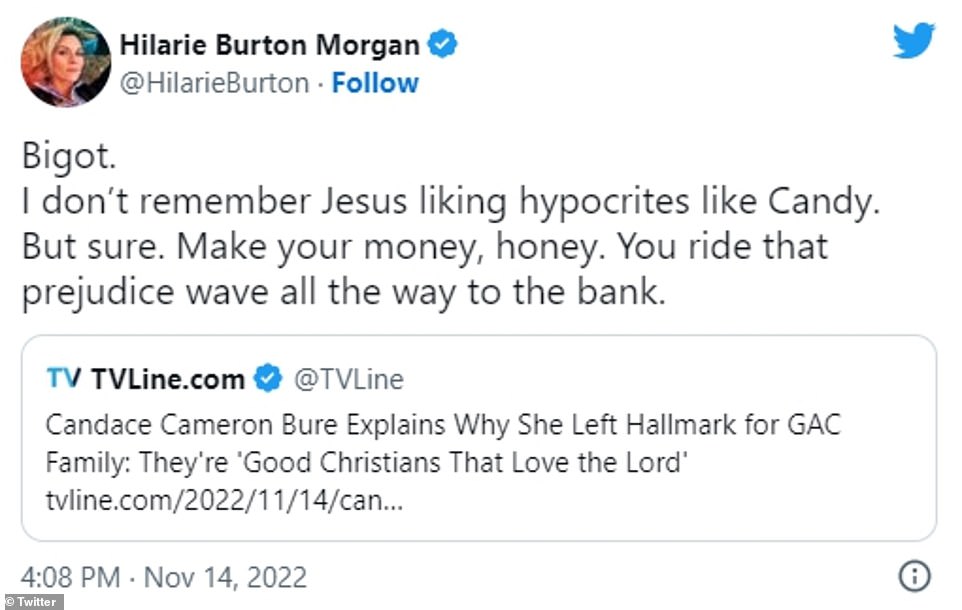 Hitting out: Burton called Bure a ‘bigot’ following the remarks 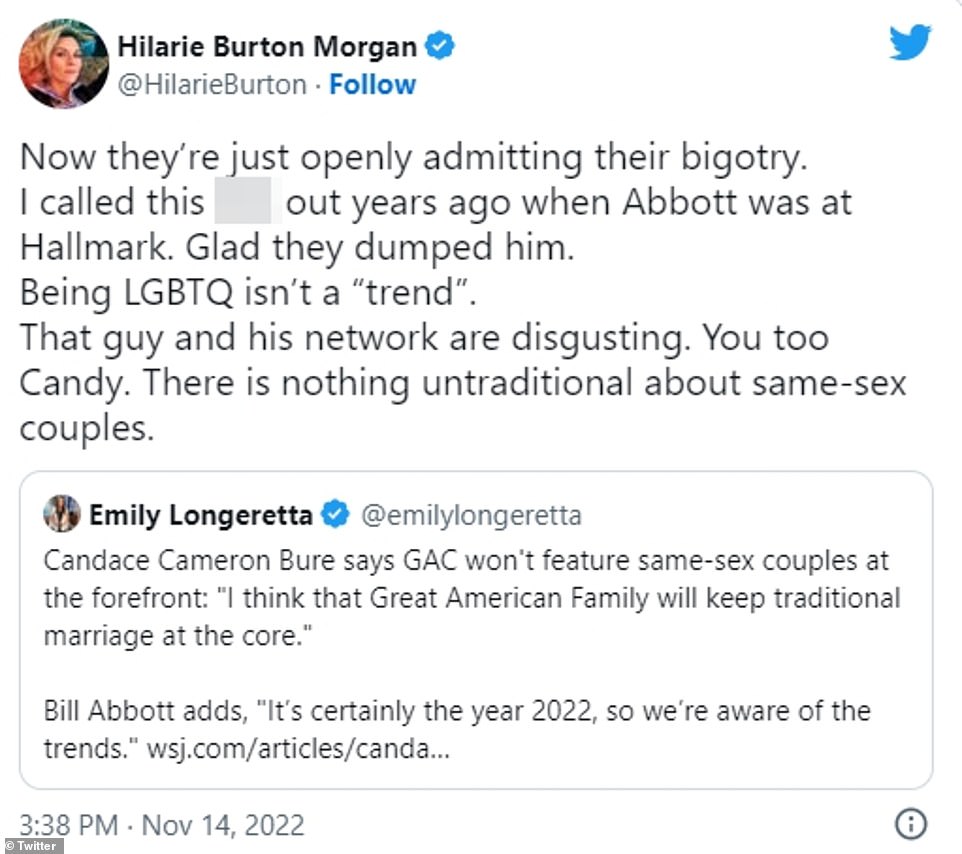 It was announced in April that Candace had inked a deal with GAC Media to ‘develop, produce, and star in movies and television programming across GAC Family and GAC Living’, Variety reported.

Actress Hilarie Burton was among those slamming Candace on Twitter after her interview was published.

‘Bigot,’ she tweeted. ‘I don’t remember Jesus liking hypocrites like Candy. But sure. Make your money, honey. You ride that prejudice wave all the way to the bank,’ she wrote.

She also called out Abbott in a separate tweet slamming his remarks calling LGTBQ a ‘trend.’

Disbelief: JoJo Siwa, who was recently feuding with Bure after calling her the ‘rudest celebrity’ she had ever met, also slammed the actress as ‘rude and hurtful’ 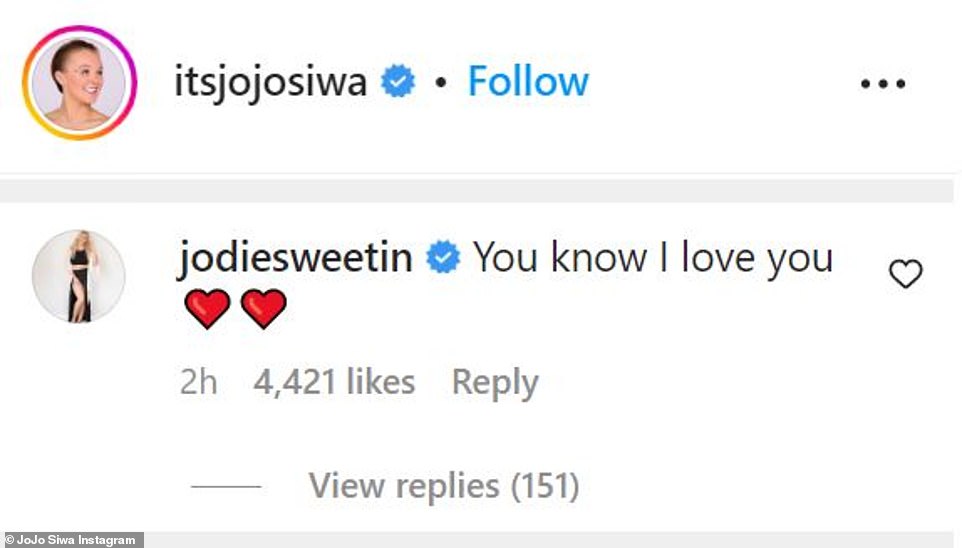 ‘You know I love you’: Even Candace’s Full House co-star Jodie Sweetin appeared to take a dig at her

‘Now they’re just openly admitting their bigotry,’ Hilarie also wrote in a separate tweet. ‘I called this s**t out years ago when Abbott was at Hallmark. Glad they dumped him. Being LGBTQ isn’t a “trend”. That guy and his network are disgusting. You too Candy. There is nothing untraditional about same-sex couples.’

JoJo Siwa, who was recently feuding with Bure after calling her the ‘rudest celebrity’ she ever met, also slammed her as ‘rude and hurtful’.

‘honestly, I can’t believe after everything that went down just a few months ago, that she would not only create a movie with intention of excluding LGBTQIA+, but then also talk about it in the press. This is rude and hurtful to a whole community of people,’ she posted to Instagram.

Backlash: Twitter users expressed their displeasure after the publication of Bure’s remarks

Even Candace’s Full House co-star Jodie Sweetin appeared to take a dig at her.

Numerous others also expressed their displeasure with Bure’s remarks.

‘Am i the only one that thinks that the statement made by @candacecbure on leaving the @hallmarkchannel just screams homophobic? I’m so tired of this woman hiding her homophobia behind her “Christian values”,’ one Twitter user posted.

‘What a hateful individual #candacecameronbure is ! Thanks for declaring #GreatAmericanFamily anti gay and for the #trumpers only,’ another tweeted.

This is certainly not the first time Bure has faced backlash online.

Last year Bure was criticized over the people she followed on social media – however she insisted ‘a follow does not mean an endorsement.’

Addressing the outrage last year, she said on an Instagram Story: ‘I read several comments from people … that were disappointed or told me that they were unfollowing me because of the people I choose to follow on Instagram,’ Bure said.  ‘And it’s always strange to me because I follow a very broad range of people — politically, within my work industry and then personal friends and things I like. But a follow does not mean an endorsement.’

Bure – who follows political figures such as President Joe Biden, Barack Obama, Melania Trump, and Candace Owens – insisted having a diverse group of voices to follow doesn’t mean she is alignment with ‘everything they say and do’.

‘It just means I follow a broad range of people so that I have perspective,’ she said. ‘I want to know what’s going on in the world, I want to hear different sides of the argument. I follow people in entertainment that I don’t necessarily agree with or act the same way, but I want to hear what our society, what culture is dishing out.’

‘I follow left and right, but it doesn’t make my blood boil,’ the actress added. ‘I don’t get angry at it. So maybe it’s healthy for some of you not to follow people you disagree with. But it doesn’t upset me. It just gives me perspective.’ 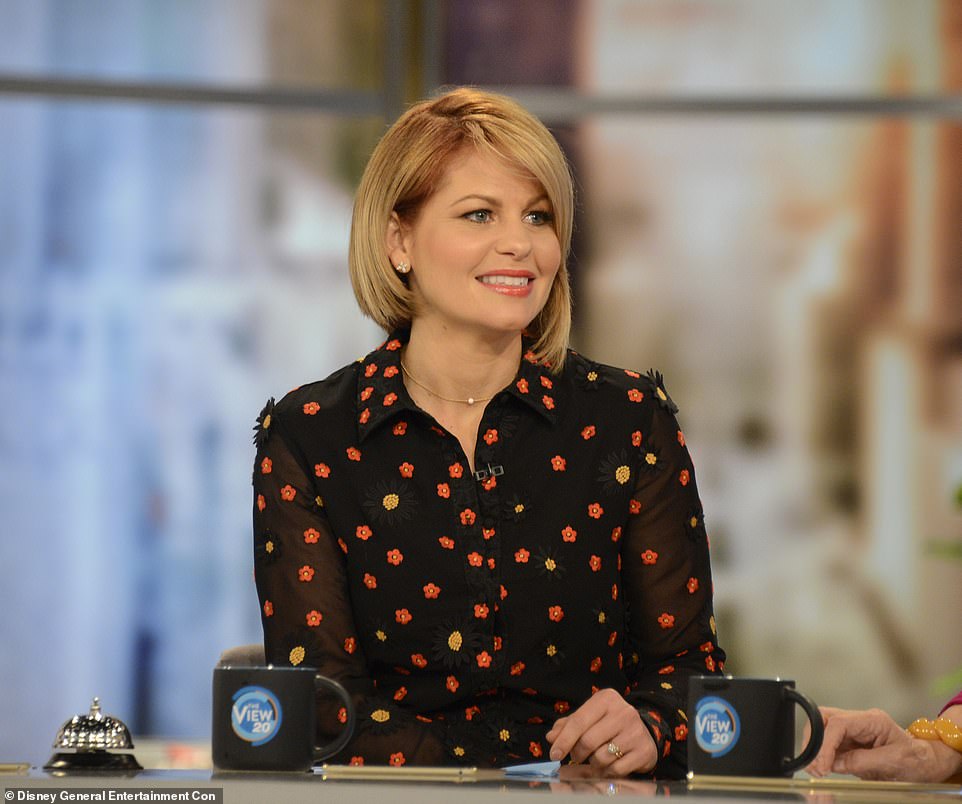 Backlash: Last year Bure was criticized over the people she followed on social media – however she insisted ‘a follow does not mean an endorsement’