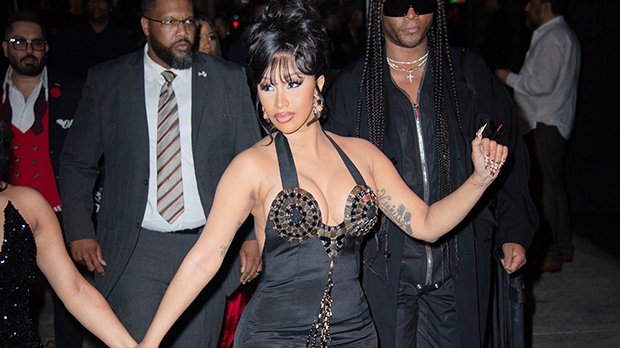 Cardi B was photographed heading to a Met Gala after-party in a look fit just for her. The rapper wore a figure-hugging black gown, which featured a low-cut neckline and gold embellishments on her chest and down her midsection. The dress had a halter neckline, wrapping around the back of her neck to show off her full chest. She let the dress do the talking by keeping her hair pulled back into a high updo with bangs hanging down the front of her forehead, as well. The look was complete with chunky, platform gold heels and long nails.

Earlier in the night, Cardi walked the Met Gala red carpet in an equally epic look. She cascaded up the Met steps in a gold gown, which was intricately designed with embellishments throughout. The dress included a matching, thick choker around her neck, as well as gloves up both arms. She also wore gold earrings so her accessories matched, too. Cardi’s hair was in the same updo for the Met Gala, with a glamorous, dark makeup look, including a bold lipstick.

Cardi’s appearance at the Met Gala came eight months after she welcomed her second child with her husband, Offset. Cardi has kept the newborn out of the public eye, although she finally debuted his first photo in mid-April. She also confirmed her son’s name, Wave Set Cephus. Wave joins his older sister, Kulture Kiari Cephus, who was born in July 2018.

When Kulture was a newborn, Cardi also made a point to keep her off of social media. However, now, the three-year-old has become quite a star on her mom’s Instagram page. Cardi even runs Kulture’s own Instagram account, where she posts adorable photos and videos of the toddler. We’ll have to see if Wave follows suit!