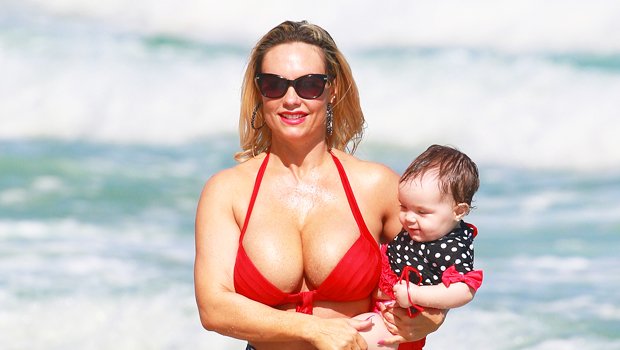 Twinning! Coco Austin, 43, and her daughter Chanel, 6, rocked matching pink bikinis in new photos shared by the proud mom on May 26. Coco, who shares her daughter with husband Ice-T, struck the same pose as Chanel in their stylish two-piece swimwear at the Bahamas Bay Water Park in the Bahamas. Coco’s pink hair matched her bikini, which showcased the actress and dancer’s sexy curves. The mother-daughter duo also each sported sunglasses for the impromptu photoshoot.

In the first two photos, Coco and Chanel posed at the pool in their bikinis. Then, the pair turned around to hold hands and go on the water park rides, allowing Coco to showcase her thong bikini and big booty. Coco’s post also featured a sultry selfie of the former swimsuit model laying down soaking up the sun. She showed off her orange manicured nails in the final image.

In her caption, Coco wrote, “People ask if we’ll ever get sick of matching… the answer is no!! We both love it too much been doing since Chanel was born.” She also revealed that her and Chanel’s swimsuits are from SugarDollz, a swimwear store located in Canyon Lake, California.

Coco and Ice-T, 64, are vacationing with their daughter at the Atlantis Resort in the Bahamas. The couple faced criticism for a social media photo where the 6-year-old is seated in a stroller while CoCo and Ice-T stood behind her shopping. “Oh lord!! Really people? The world loves to criticize [literally] everything i do!” Coco tweeted out on May 24. She went on to call the comments “ridiculous,” and pointed out that people should be more focused on the tragic school shooting Robb Elementary School in Uvalde, Texas.

Ice-T, who has been married to Coco since 2002, also responded to the criticism. “Lol… CNN? Really?” the  Law & Order actor wrote after re-tweeting a CNN article. “MFs ain’t got s–t else to talk about. F em all. Smh. Lol,” he added.