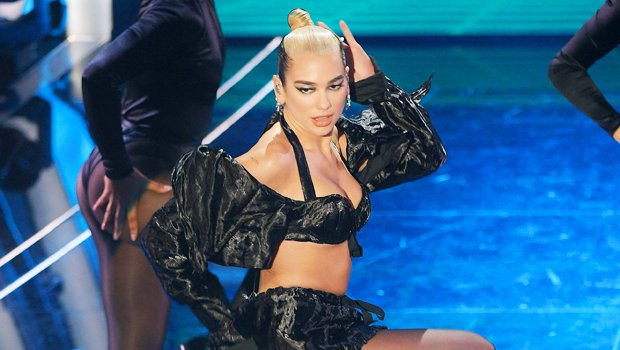 Dua Lipa never ceases to amaze us and that’s exactly what she did in her newly released music video for “Potion.” The 26-year-old danced around in the video wearing a slew of sexy outfits from her crop top to her sparkly mini dress.

The singer put her toned abs on full display in a vintage Roberto Cavalli outfit featuring a long-sleeve pink patterned pheasant shirt from S/S 2003 with a high-waisted leo print skirt from S/S 2002. The long-sleeve top was actually a full blouse, but Dua tied it up to just under her chest to make it cropped and sexier. She topped her look off with black Dior by John Galliano fall 2000 logo boots.

In her second outfit from the video, Dua wore a spaghetti strip silver silk Roberto Cavalli S/S 2000 diamond spray dress that had a low-cut neckline and short hem. She styled the mini dress with a pair of knee-high Dior S/S 2000 monogram boots from My Runway Archive.

Dua posted the fabulous video with the caption, “~ POTION ~ OUT NOW ~ @calvinharris @thuggerthugger1. directed by @emilnava. thank you to the incredible crew who made this day so easy and flow so seamlessly with the minimal time we had between my tour dates ~ loved shooting this video and had the most fun 24hrs!!!!”

Dua has seriously been on a roll lately and just the night before releasing the video, she was backstage at her concert in Milan when she wore a low-cut Fendace Patchwork Denim Bra, with a Fendace Mini Denim Skirt Patchwork, a pair of Slit Patchwork Denim Boots, and a Patchwork Denim Jacket in Slit Jacquard. Her toned abs and tiny waist were on display in this sexy ensemble while her dark black hair was down in voluminous waves.