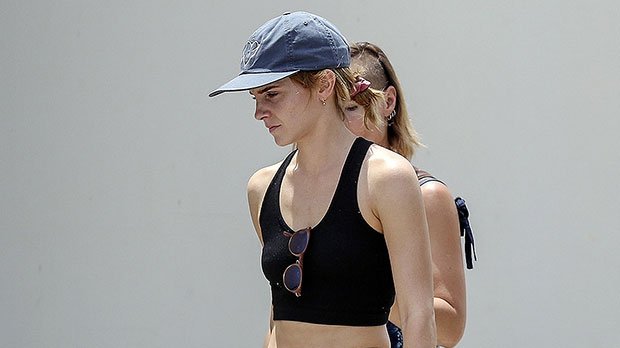 Emma Watson, 32, got in some exercise with her friends while vacationing in Ibiza. The Perks of Being a Wallflower star was photographed hitting the tennis court to play some pickleball on Monday, June 6. She sported a black biker short and crop top ensemble paired with a light blue hat embroidered with a white heart design. The actress also wore brown-rimmed sunglasses and had her hair tucked into a low bun that poked out from the bottom of her hat. She completed her look with gray sneakers.

Emma was pictured arriving at the court in the same outfit but wore a t-shirt over her crop top. The t-shirt had the hashtag “#heforshe” printed on the left chest area, a hashtag created by the United Nations as part of the HeForShe initiative aimed at promoting gender equality around the globe. Emma has been a UN Women Goodwill Ambassador since 2014.

The pictures surfaced shortly after the Harry Potter actress was photographed enjoying the Spanish island of Ibiza via horseback. She donned an orange V-neck lace bralette with a pair of high-waisted cropped leggings and black sneakers for the outing. She also protected her eyes and head with sunglasses and a black helmet.

Emma Watson: Pics Of The Actress

Emma has been on vacation for at least a week, as she was spotted walking the streets of Barcelona with friend Nupur Sharma on June 1, as noted by the Daily Mail. She donned a pair of mid-length baggy cargo shorts and a loose-fitting white peasant top with a maroon design. She matched her neutral look with a black shoulder bag and black sneakers.

Emma seems to be getting her sun time in effortlessly, as she vacationed in Barbados at the end of 2021. She showed off her stunning beach body in a dark red strapless bikini by Johanna Ortiz. The bottoms were high-waisted and featured a wrap tie design in the front. She rocked the cute suit both on a boat and splashing around on the shore of the island.

Emma Watson & Tom Felton’s Relationship Through The Years: From First Crush To BFFs

Of course, the trips are well-deserved, as she has been a working actress since she was just a pre-teen. She has no problem dropping some dough on a vacation here and there, considering she has a net worth of $85 million, according to Celebrity Net Worth.