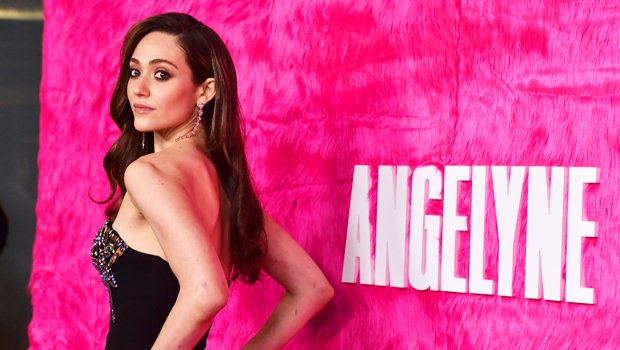 Emmy Rossum looked better than ever when she attended the premiere of her new limited series, Angelyne, at the Pacific Design Center in West Hollywood on May 10. For the event, the 35-year-old wore a stunning strapless black Versace gown with a thigh-high slit.

Emmy’s Versace Pre-Fall 2022 dress featured a plunging neckline that was embellished with intricate, crystal fan details. The bodice of the dress was super fitted while the sides of her hips also had the same bedazzled fans. On the side of the skirt was a plunging slit that revealed her long, toned legs and strappy black sandals.

As for her glam, she opted for an old-Hollywood look featuring a voluminous, bouncy blowout done by Clayton Hawkins, a sultry smokey eye, and a glossy nude lip done by makeup artist, Mélanie Inglessis. A pair of diamond chandelier earrings topped off her ensemble.

Emmy’s look was a total 180 from the character, Angelyne, that she plays in the show. Angelyne was a blonde bombshell known for her super racy billboards around Los Angeles in the mid-1980s. In the show, Emmy rocks platinum blonde poofy hair with dramatic eye makeup and fake breasts.

Emmy announced that she gave birth to her daughter with husband, Sam Esmail, back in May 2021. She shared the first photo of her baby girl in June and since then, Emmy has stayed out of the spotlight. Despite staying out of the public eye, Emmy thankfully still shares a ton of photos of herself and her daughter to social media.