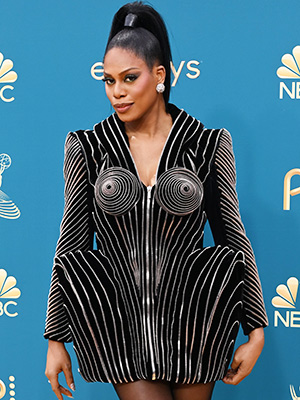 Laverne Cox looked stunning in a black & white pinstripe Jean-Paul Gaultier mini dress with two cones on the chest & a silver zipper down the front paired with sheer black tights, black pointed-toe pumps & a slicked back high ponytail at the 74th Primetime Emmy Awards at Microsoft Theater in Los Angeles on Sept. 12.

The moment we’ve all been waiting for has finally arrived – the 2022 Emmy Awards! This year’s award show was held at the Microsoft Theater in Los Angeles on Sept. 12 & all of our favorite stars were in attendance. From Selena Gomez to Kaley Cuoco, the red carpet was jam-packed with stylish arrivals. This year, HBO’s ‘Succession’ landed the most nominations but other shows including Selena Gomez’s ‘Only Murders in the Building,’ Kaley Cuoco’s ‘The Flight Attendant,’ ‘The White Lotus,’ and so many other fabulous shows were nominated. You can see photos of all of the amazing red carpet arrivals, right here.