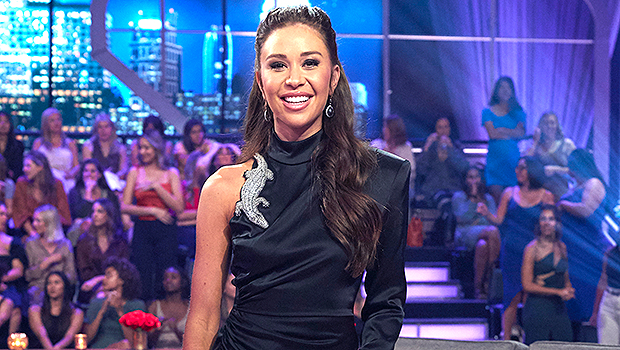 Gabby Windey returned to face the men she eliminated so far on The Bachelorette during the Men Tell All special. The special taped earlier this month and will air on Aug. 29. Gabby showed up to the event looking like an absolute bombshell in a little black dress, which featured a high neckline and one sleeve.

She accessorized with silver, in order to match the bejeweled silver animal adorned into the dress’ right shoulder. Her look was complete with silver, open-toed shoes, as well as a silver ring, silver/black bracelet and dangling silver/black earrings. She wore her hair pulled back into a half ponytail with curls, and had on dark eye makeup to complement the dress.

Gabby was joined at the event by her co-Bachelorette, Rachel Recchia. Both ladies came face-to-face with some of the men who have been eliminated on this season so far. Of course, for Gabby, one of the biggest heartbreaks was Nate Mitchell. She sent Nate home ahead of hometown dates when she realized that she wasn’t ready to be a stepmother to his daughter. The two had formed a close connection prior to that, so the breakup was devastating for both of them.

Now, Gabby has three men remaining who are hoping to fall in love with her and propose to her at the end of the show. Her final three men are Erich Schwer, Jason Alabaster and Johnny DePhilippo. Gabby met the guys’ family during hometown dates on Aug. 22, and fans are waiting to find out if all three of them will move onto fantasy suite dates next week.

Fantasy suite dates will kick off on Monday, Sept. 5 before the show switches to Tuesdays for its final two episodes on Sept. 13 and Sept. 20. Once The Bachelorette ends, season 8 of Bachelor in Paradise will kick off on Tues., Sept 27.

Nate Mitchell: 5 Things To Know About ‘The Bachelorette’ Contestant