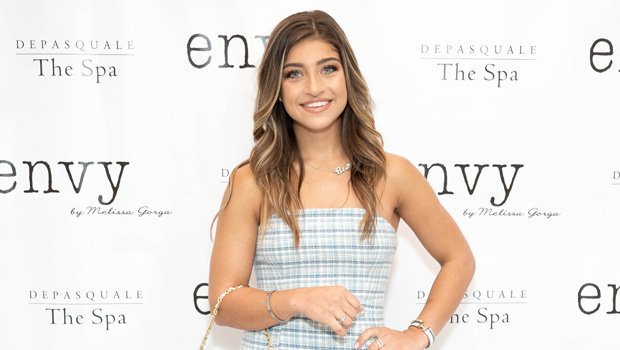 Gia Giudice is pretty in pink! The 20-year-old daughter of The Real Housewives of New Jersey star Teresa Giudice, 50, celebrated her mother’s new home in a pink floral dress purchased from a local New Jersey boutique called Hazel Boutique. The beautiful dress featured poofy short sleeves and a wide neckline that gave way to a tight bodice. The bottom portion of the girly dress flowed effortlessly around Gia’s tanned legs. Gia, a star in her own right, styled her slightly curled and blonde-highlighted hair down and accessorized with a silver necklace with a rectangular charm. A pair of pink heels completed her adorable ensemble.

Gia captioned her photo, “don’t f*** with the love bubble as tre would say,” and stood in front of gold word balloons, one of which read, “bubble”. She shared two other photos in her post, the second of which featured her mother, who has been engaged to Luis Ruelas since Oct. 2021. Teresa also wore pink via a bodyon crop top and skirt combo that featured several skin-showing cutouts. Teresa also wore her curled hair down and completed her look with pink shoes. In the last photo Gia shared, she posed with some girlfriends who were also dressed up for the housewarming party.

Teresa listed her Montville, NJ home for a cool $2.5 million in Sept. 2020. She previously resided in it with her ex-husband Joe Giudice, who was deported from America in 2018. The house served as the family home for Teresa, Joe, and their four girls for years. During an April episode of ‘RHONJ’, Teresa and her girls Gia and Milania got emotional as they reminisced about all the memories they share there. “I’m excited for the new house, but I’m also sad to leave this house,” Milania revealed. “The only memories that we’re gonna have were here with Dad. A lot of things have happened here.”

Teresa also reflected on her move in a confessional. “I can’t believe that I’m gonna be moving out next week,” she stated. “I mean, when I moved in, I thought I would be here forever, but I wouldn’t be making this big step if in my heart, I didn’t feel like it was right.”

In Feb. 2021, Teresa and her fiancé moved into $3,350,000 mansion in Montville, NJ, according to TMZ. It has seven bedrooms and features exciting bonus rooms such as a library, theater, and home gym. While Teresa may have been sad to leave her former house, it just means she will be able to make new memories in her new one, such as the housewarming shindig!