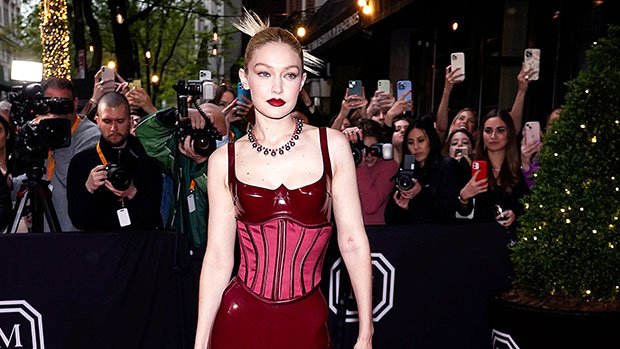 Gigi Hadid is giving off a totally different statement from her Jessica Rabbit-esque 2021 Met Gala dress with tonight’s look! The top model stepped out looking red hot in a latex red catsuit featuring a structured corset bodice. The skintight bodysuit showed off her epic figure all the way down to her feet, where she wore sleek red sock booties of the same color and style. Gigi pulled her hair back into a tight low bun that had some stray pieces of straight hair pulled out, a la ’90s. She opted for a bright red lip and a stunning necklace of rubies around her exposed neckline. Gigi’s nails also matched her look and were stiletto shaped in a bright red!

Gigi Hadid has been a statement at Met Galas through the years, her first being in 2015 when she opted for a red DVF gown. While the style was more simple than her later looks, it was a perfect entry dress to her future as a Met pro! She returned the following year in 2016 with a more daring look for the theme, Manus x Machina: Fashion in an Age of Technology. Alongside her then-boyfriend Zayn Malik, Gigi looked futuristic in a high-neck, grey Tommy Hilfiger gown, which featured a sheer skirt and sequin bodysuit. Gigi stuck with Tommy for the 2017 event, taking things up a notch with a champagne-colored structured, off-the-shoulder gown with a massive tulle train. She played up the look with fishnet stockings and dramatic cat eye makeup.

Later, in 2018, Gigi teamed up with Versace to achieve the Heavenly Bodies theme. For that Met, the model looked like a stained glass goddess with her angelic gown that featured a high-slit and one shoulder. In 2019, Gigi fully embraced the “Camp” theme, working with Michael Kors to bring to life a look that could only be described as EXTRA! Taking the stairs solo, she donned a fully-embellished, head-to-toe silver jumpsuit, that featured a matching, floor-length jacket, boots and a headpiece. She went full-out with the make-up, rocking massive white eyelashes and a nude lip, that completed the look.

Of course, due to COVID, the 2020 Met Gala was cancelled, and the 2021 event took place in September 2021, instead of the traditional first Monday in May. Gigi didn’t disappoint, however, and showed up to the 2021 Met Gala in a Prada look that was reminiscent of Old Hollywood glam! The model rocked a sultry white strapless gown with elbow-high leather black gloves, and pulled her newly-dyed red hair up into a ponytail. What a look!