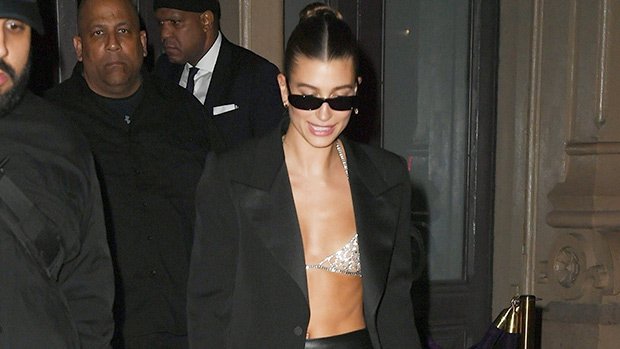 Hailey Bieber came to slay after the 2022 Met Gala. Following the high-profile event in New York City, Hailey hit up one of the buzzed-about after-parties, and she looked beyond amazing. Hailey wore a sparkling silver crop top, which tied around her neck like a bikini. She paired it with a tiny black leather mini skirt ,as well as an oversized black blazer. She kept her hair up in a slick updo with a middle part and rocked sunglasses amidst the flashing paparazzi lights.

Earlier in the night, Hailey walked the Met Gala red carpet in a Jerry Hall-inspired look which fit the Gilded Glamour theme of the evening. She wore a white dress that dipped low in the back and had a dangerously high leg slit. She also wore a white feathered jacket, which she held out to the side for the ultimate red carpet photo opp. The look also included tights and open-toed black heels, along with diamond earrings.

Hailey rode solo for the evening, with her husband, Justin Bieber, in the midst of his world tour. His next show will be in Kansas City on May 4. Luckily, Hailey was in good company at the Met, as many of her friends were in attendance. Of course, Hailey spent time with the Kardashians, including Kendall Jenner and Kylie Jenner. Gigi Hadid and Bella Hadid were also there, along with a slew of other models and stars.

Earlier this year, Hailey suffered a terrifying health scare, which left her hospitalized. Hailey eventually found out that she’d had a stroke, which was caused by a blood clot in her brain. She opened up about the scary ordeal in a YouTube video at the end of April. After further testing, she found out she had a hole in her heart, which she had closed up by doctors after the diagnosis. Luckily, Hailey is no longer suffering from any stroke-related symptoms, and she looked good as ever while out and about at the Met Gala.