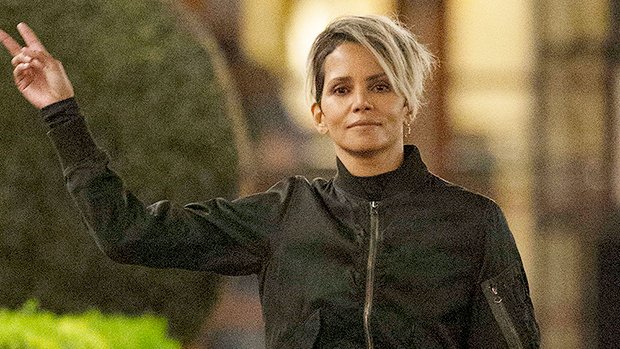 Halle Berry is always rocking a new hairstyle and no matter what she tries out, she always manages to pull the look off. The 55-year-old debuted a new short, gray hair makeover while filming a new movie on April 19 in London, and we couldn’t help but notice how much she looked like her character Storm, from the X-Men movies.

Halle was filming her new movie, Our Man from Jersey in London with Mark Wahlberg when she rocked a short gray hairstyle that had black highlights in it. Her pixie cut was longer on one side, showing off her new silvery strands, while the other side was cut extremely short. She styled her new look with a head-to-toe black ensemble featuring a bomber jacket, a turtleneck, sweatpants, and combat boots.

While we loved Halle’s new hairstyle, it didn’t feel totally new to us considering her iconic character, Storm, from X-Men, rocked gray/silver hair. Halle’s character had the power to manipulate weather and would channel power from thunder and lightning storms.

Throughout the films, Halle’s hair color would remain the same silvery shade, but she would switch up the styles. From buzz cuts to short spiky hair, long hair, bangs, and even another pixie – Halle expertly pulls off the hair color.

Halle has been rocking this short pixie cut for a few weeks and she first debuted the makeover at the Critics Choice Awards back in March. She hit the red carpet with her new hair which was much blonder than the gray she just opted to go for.

The Best Clip In Hair Extensions According To Celeb Stylists