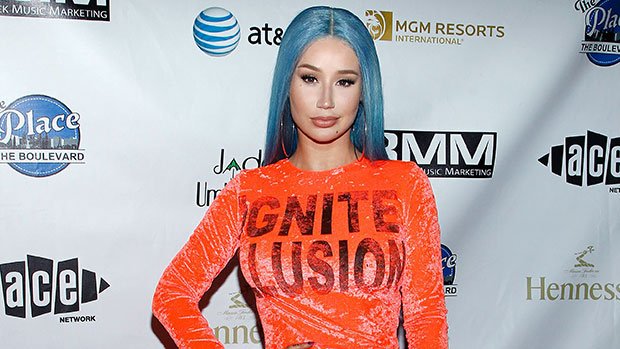 Iggy Azalea is having the time of her life in Cabo, Mexico with her friends. The “Fancy” hitmaker has been sharing videos on her Instagram Stories from the gorgeous vacation ahead of her 32nd birthday on June 7. Iggy rocked a two-piece orange bikini as she celebrated on a boat with her pals, dancing and taking shots of alcohol in the sun. Iggy’s swimsuit showcased the star’s stunning physique and she also rocked a pair of sunglasses while styling her blonde hair in a messy bun.

Iggy showed off her sexy bikini in close up videos that were posted to her IG Stories after the boat excursion. She sat in a hot tub with a few of her friends, pointing the camera at herself as she goofed around. The whole group gathered together for more dancing, which Iggy continued to document with her phone.

Later that night, Iggy was surprised with a gorgeous two-layer birthday cake with sparklers. The Grammy Award nominee, who switched outfits into a colorful dress and massive hoop earrings, smiled and cheered as her friends sang “Happy Birthday.” Iggy blew out the candles and the group continued partying for the superstar’s birthday.

This trip was a much-needed getaway for Iggy, who is usually at home taking care of her 2-year-old son, Onyx Kelly. The “Work” singer shares her baby boy with rapper Playboi Carti, who she split from months after the birth. Iggy has openly slammed the father of her child, accusing Playboi of missing his son’s first Christmas and that he hadn’t signed the birth certificate. In tweets from April, which Iggy has since deleted, she revealed that the exes are “not on good terms.”