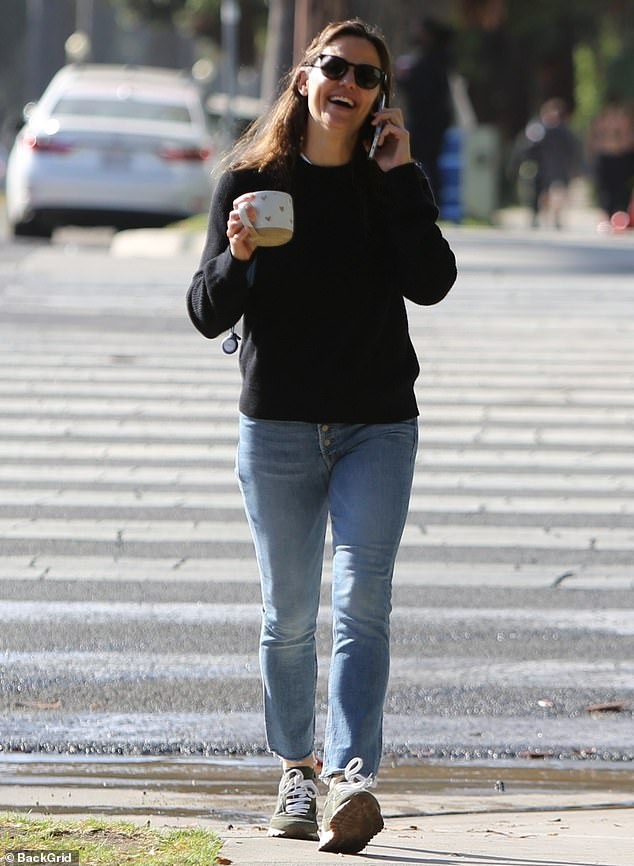 By Alesia Stanford For Dailymail.Com

Jennifer Garner enjoyed coffee and a phone call after she dropped her son off at school Wednesday.

The 50-year-old actress appeared makeup free as she walked to school hand-in-hand with her son, Sam, 10, in Los Angeles.

The Yes Day star s looked low-key in a black crew neck sweater, dark sunglasses, button-front jeans and sneakers for her the morning stroll. Her hair looked as if it were still wet from her morning shower.

Morning chat: Jennifer Garner, 50, enjoyed a cup of coffee and a morning chat as she walked home from school drop off Wednesday morning

After seeing Sam safely to class, The Adam Project star was spotted laughing and smiling as she chatted on her mobile phone and sipped on a cup of java.

The coffee was in a ceramic heart print mug that looked like it was brought from home.

On Instagram, the Screen Actors Guild award winner star shared a bit of baking and activism.

The Alias star demonstrated how to make vegan Brownie Baked Oatmeal in an endearing video for her Pretend Cooking Show.  She began the video ‘You know when you need to be living life, but your heart isn’t ready? Sometimes sometimes you need a little comfort something.’ 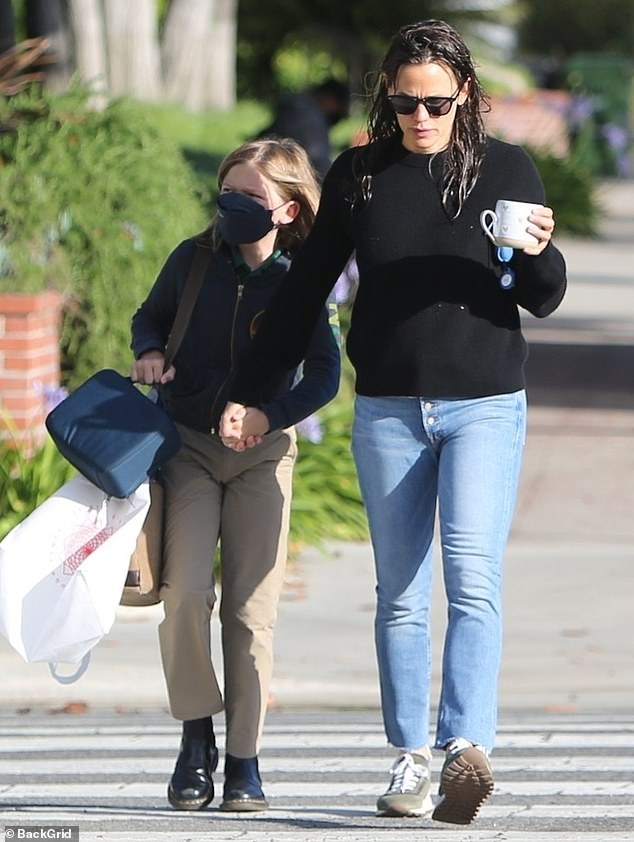 Relaxed: The Adam Project actress looked relaxes as she walked hand-in-hand with son Sam, 10.  Her hair appeared still wet from a morning shower 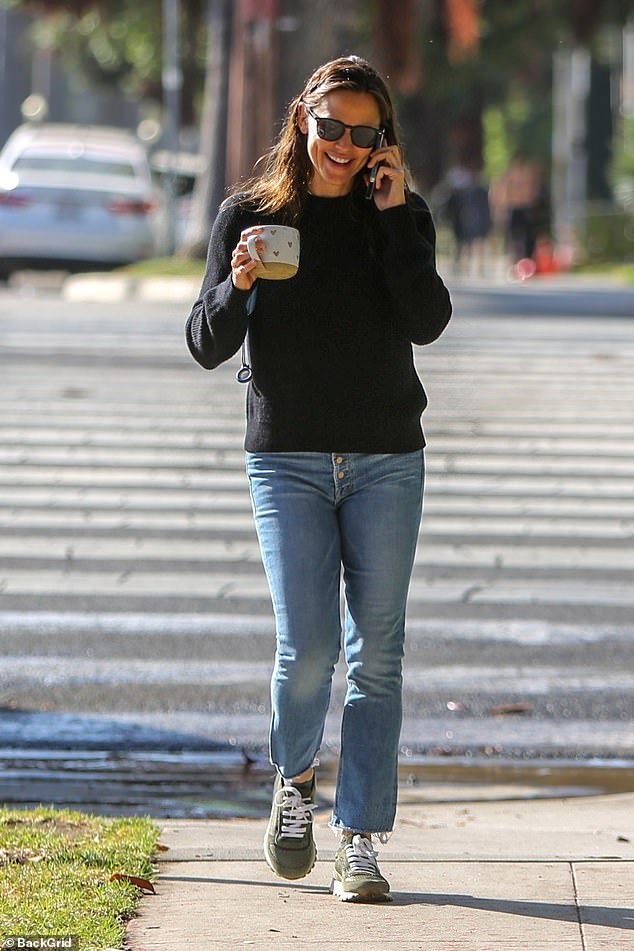 The star shared that she was trying to be fancy by wearing a dress, but ‘then I put sweat pants under it. So, pardon me, there.’

While putting together the ingredients, the mom of three, Violet, 16, Seraphina, 13 and Sam, introduced fans to a new expletive, ‘shipoopi,’ as she struggled to get nut butter out of a jar.

While the batter was baking the Save the Children USA board member made a call to one of her US Senators, asking them to consider gun control legislation in the wake of the deadly school shooting that killed 19 children and two adults. 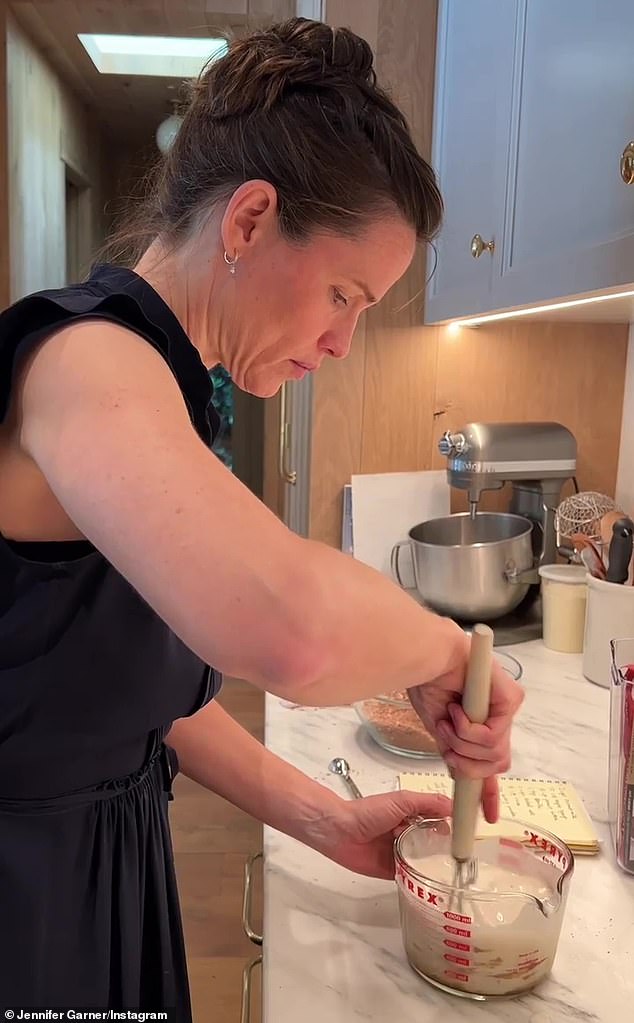 Comfort: The mom of three shared a vegan Brownie Baked Oatmeal recipe on Instagram, telling fans, ‘You know when you need to be living life, but your heart isn’t ready? Sometimes sometimes you need a little comfort something’

Jennifer followed a script she got from News Not Noise journalist Jessica Yellin, 51, which read ‘Hello, I’m a constituent. I’d like to let the Senator know it is important to me that s/he votes for the gun safety reforms coming through Congress.’

The script encourages callers to explain why the legislation matters to them, if they are so inclined.

When not baking or making calls, the busy actress has several project in the works, including The Last Thing He Told Me, which is being produced by pal Reese Witherspoon’s Hello Sunshine company. 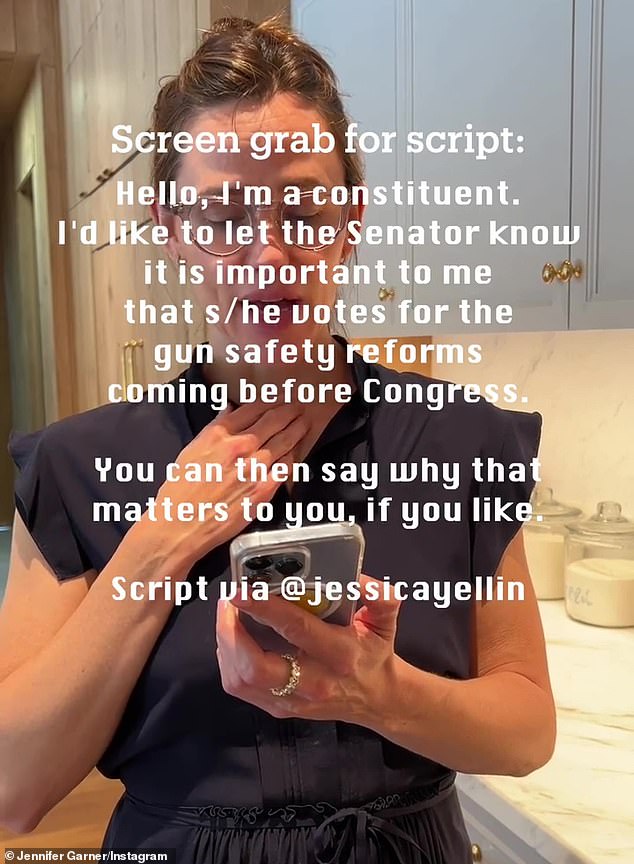 Call: The Alias star made a phone call to her Senator encouraging support for upcoming gun safety reforms, sharing a script she got from News Not Noise journalist Jessica Yellin