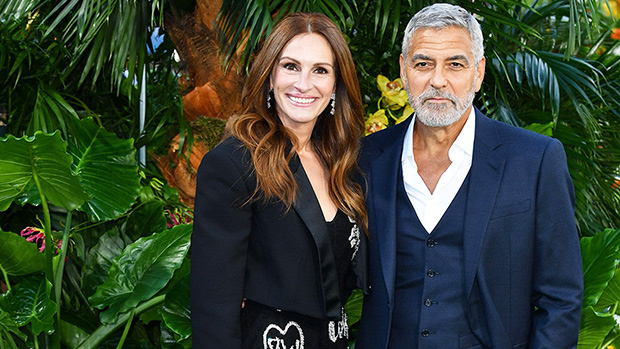 Julia Roberts and Amal Clooney looked gorgeous on the red carpet of the Sept. 7 London premiere for Ticket to Paradise, which stars the 54-year-old actress and George Clooney. Julia rocked an edgy but elegant black gown printed with white hearts, numbers, and initials made to look like graffiti. A closer look at her dress, however, reveals that the graffiti is quite meaningful: It stands for important people and dates in her life. For instance, “JR+DM” stands for her initials and those of her husband, Daniel Moder, and the year 2002 is when they tied the knot. “HD” are the initials of Julia and Daniel’s youngest son, Henry Daniel, while “H+F+H” stands for each of their children’s first initials: Hazel, Phinnaeus, and Henry. Finally, 2004 is the year her twins Hazel and  Phinnaeus were born, while 2007 is when Henry was born. How sweet!

Julia paired the sentimental floor-length dress with a cropped black blazer that featured a singular button. Her makeup was minimal and her hair was in simple, loose waves, letting her dress serve the drama. The Eat Pray Love actress completed her look with silver dangling earrings and black nail polish.

Meanwhile, Amal, 44, looked regal in a fitted, pale blue, spaghetti strap gown embellished with sequins. The sparkling dress was paired with shimmering silver heels, a silver clutch, a glistening bracelet, and long, dangling earrings. She, too, styled her hair in casual waves.

Finally, George, 61, looked dapper in a navy blue three-piece suit. He wore a white open-collar button-down underneath and completed his look with black dress shoes. The From Dusk Till Dawn actor posed with both his lady and Julia in separate pictures and smiled a huge grin to photographers as he stood between the two beauties in other snapshots.

The London premiere of Ticket to Paradise, which is set to debut in October, came just days after George revealed to The New York Times that a kissing scene between his character and Julia’s took “like, six months” to film correctly. “I told my wife, ‘It took 80 takes,’” he recalled in an interview published Sept. 5. “She was like, ‘What the hell?’” He clarified, “It took 79 takes of us laughing and then the one take of us kissing.”

He also noted that the Academy Award-winning actress signing onto the film encouraged him to take his role. “I hadn’t really done a romantic comedy since One Fine Day — I haven’t succeeded like Julia has in that forum — but I read it and thought, ‘Well, if Jules is up for it, I think this could be fun,’” he explained.

Julia Roberts’ Husband: Everything to Know About Daniel Moder & Their 19-Year Marriage

According to a synopsis on AMC, Ticket to Paradise follows the journey of two exes who “find themselves on a shared mission to stop their lovestruck daughter from making the same mistake they once made”. The film is written and directed by Ol Parker, who directed 2018’s Mamma Mia: Here We Go Again.