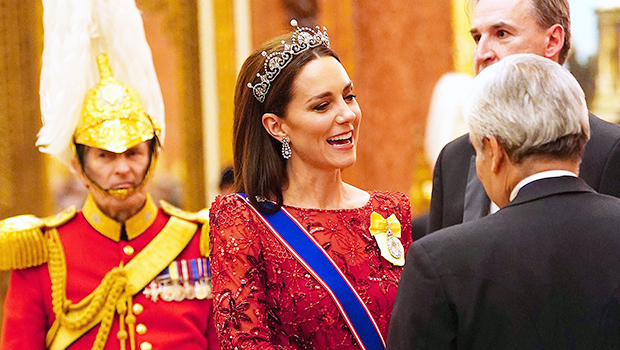 Royal behavior. Kate Middleton was pure elegance at a Buckingham Palace reception for the Diplomatic Corps on Tuesday, Dec. 6.

The Princess of Wales, 40, stunned as she greeted guests besides her husband Prince William, 40, his father King Charles, 75, and Queen Consort Camila, 75. None of the royals seemed worried about Prince Harry and Meghan Markle’s tell-all Netflix documentary, which comes out Thursday, Dec. 8.

Kate was the center of attention in her red Jenny Packham gown. The long sleeve dress was full of scarlet sequins and fell to the floor elegantly. Perfectly tailored, the frock hugged her svelte figure while still staying demure. And while Kate’s dress was clearly dazzling, it was her jewelry that really had people talking.

Embracing her royal duties, Kate rocked several gorgeous heirlooms to the event. She topped her gorgeous brunette tress with the delicate Lotus Flower Tiara, once worn by Princess Margaret. Framing her face, were a pair of Queen Elizabeth II’s own Diamond Frame drop earrings.

The family’s appearance came on the same night Harry and Meghan were given the Ripple Of Hope Award in New York, ahead of the release of their Netflix documentary about their time in the royal family. During the event, Meghan explained why she decided to open up about her struggle with thoughts of self-harm, which she previously admitted began during her time serving as a royal.

“I don’t want anyone to feel alone,” she said. “We all need to, when we can, if we feel brave enough, to just speak honestly about your own experience.”