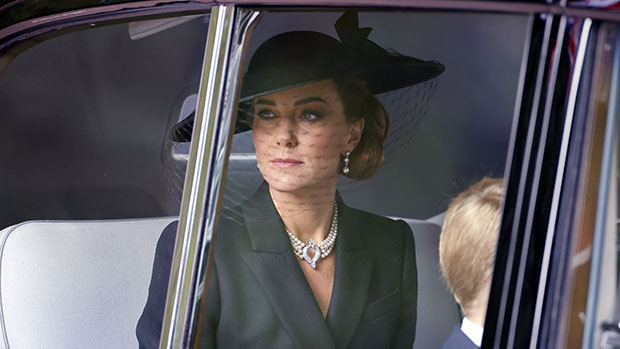 The Princess of Wales, Kate Middleton, paid special tribute to Queen Elizabeth II while attending the monarch’s funeral on Sept. 19. Kate wore two pieces of jewelry from The Queen’s collection at the service. Her pearl choker necklace and Bahrain Pearl Drop earrings both belonged to The Queen. Kate’s late mother-in-law, Princess Diana, also previously wore the stunning, four strand choker necklace. Kate paired the jewelry with a black coat and fascinator hat, and she looked somber as she mourned her husband’s grandmother at the publicized service.

Queen Elizabeth II was given the choker necklace by the government of Japan, and Princess Diana loaned the gorgeous piece while making a state visit to the Netherlands in 1982. Kate wore the necklace for the first time herself in 2017 in a special gift from The Queen. Meanwhile, Queen Elizabeth II received the earrings as a wedding gift back in 1947, so they have been a staple in the Royal Family for quite some time.

Kate has borrowed both pieces of jewelry on various occasions, including Prince Philip’s funeral in April 2021. She also sported the earrings as recently as this past June while attending The Queen’s Platinum Jubilee celebration. Following The Queen’s Sept. 8 death, Kate has worn a number of her jewels at various public events to honor Her Majesty.

The funeral took place on Sept. 19, 11 days after The Queen died at Balmoral Castle in Scotland. Kate arrived at the event with her husband, Prince William, and two of their three children, Prince George and Princess Charlotte. Kate kept an eye on George and Charlotte while Prince William marched alongside his brother, Prince Harry, while The Queen’s coffin was brought inside the church. Once the coffin was inside, Kate and the kids joined William in the procession to their seats.