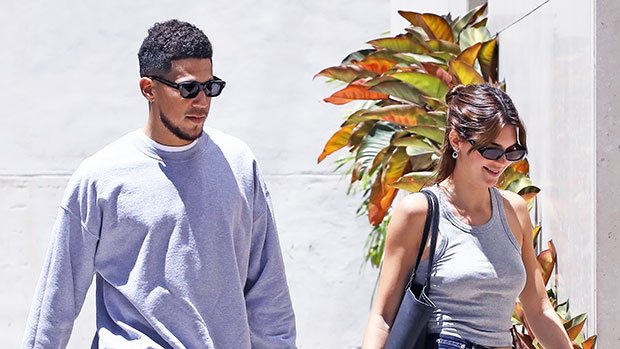 Kendall Jenner and Devin Booker are back in California following Kourtney Kardashian‘s lavish wedding in Italy. The couple were spotted in West Hollywood on Tuesday (May 24), rocking matching outfits way more casual compared to what they wore abroad. The Kardashians star, 26, and the NBA player, 25, sported matching grey shirts, dark pants, and sunglasses. They walked side-by-side towards a business building, possibly where Kendall had some model duties to attend to.

The gorgeous brunette opted for a grey tank top, a pair of blue denim pants, and dark sunglasses. Kendall also wore black leather loafers and small earrings as she carried a black bag over her shoulder. Lastly, the model styled her hair in a back updo, although she did let some of her bangs flow free in front of her face.

Devin, meanwhile, wore a long-sleeved grey sweatshirt over a white T-shirt. Clearly the heat in California doesn’t bother the pro basketball player! He also wore a pair of black pants, white Converse sneakers, and black sunglasses. As we said, these outfit choices were MUCH different than the couple’s stunning ensembles at the “Kravis” Italian nuptials, where Kendall’s sister said “I do” to rockstar Travis Barker.

In Portofino, Kendall rocked a long sleeveless fitted dress with a purple floral print for the main ceremony. Devin attended the event in a black blazer over a white button-down top and black pants. The lovebirds also made a splash at a pre-wedding family dinner , where Kendall stunned in a black strapless dress and sheer skirt while Devin opted for an all-black ensemble including a black lightweight zip-up jacket.

Prior to the wedding, Devin hadn’t attended such a widely-publicized KarJenner family event in the years that he’s been dating Kendall. So, the pro athlete’s appearance at the “Kravis” nuptials abroad “was a big deal” for Kendall, according to a source, since the famous model “knew this would be taking the next step” in their relationship.

“You can’t help but feel in love during such a romantic event, and it was definitely something they’ve talked about in recent months,” the source EXCLUSIVELY told HollywoodLife. “They both know how young they are and that they have a huge career to juggle. But it’s working for them and being together at Kourtney’s wedding only brought them closer,” they added.