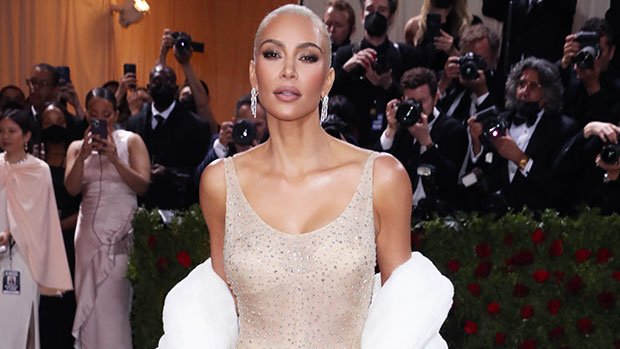 Kim looked stunning in the high-neck gown while holding the actual award that Marilyn won that night – the Henrietta Award for World Film Favorite Female. The dress featured a high neck and a tight bodice, while the entire back of the dress was cut out. Kim accessorized the look with her platinum blonde hair slicked back into a bun while a pair of dangling diamond and emerald earrings tied the look together.

Kim posted a slideshow of photos of herself in the dress with the caption, “To top off my night after The Met, I had the honor of changing into Marilyn Monroe’s Norman Norell dress that she wore to the Golden Globes in 1962 — where she received the Henrietta Award For World Film Favorite.”

She continued, “In my quest to find the Jean Louis hand beaded dress that I wore to the gala, I discovered @Juliens_Auctions owned Marilyn’s iconic green sequined gown. Further into my research I found out that the owner of the Golden Globe that she received that evening was non other than my florist @jeffleatham. I saw this all as a sign the way that all of the stars aligned. It will forever be one of the greatest privileges of my life to be able to channel my inner Marilyn in this way, on such a special night. Thank you Julien’s Auction and Jeff for helping to make this memory possible.”

Kim first made a statement when she arrived at the 2022 Met Gala wearing the $5 million dress that Marilyn wore when she famously sang “Happy Birthday, Mr. President” to President John F. Kennedy at a fundraiser for the president and the Democratic National Committee at NYC’s Madison Square Garden in 1962.

Kim Kardashian & Ray J’s Relationship Through The Years: From Dating To Sex Tape Scandal To Today