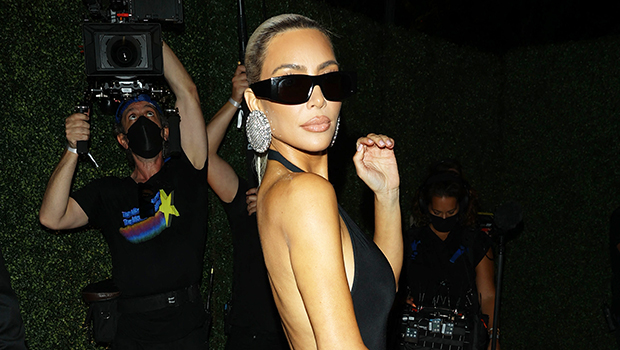 Kylie Jenner launched a collection of new products at Ulta Beauty on Aug. 24, and her big sis, Kim Kardashian, was on-hand to show her support. Even though Kylie was the woman of the hour, Kim definitely stood out in her own right. The newly-single star wore a skintight black jumpsuit, which dipped low in the back to show some skin.

Kim completed her mom’s night out look with a pair of black boots, and she also wore sunglasses, despite the sun having already set. Her hair, which has been blonde since the Met Gala in May, was pulled back into a sleek ponytail. She also accessorized with a giant pair of silver earrings.

It was a family affair at the Kylie Cosmetics launch. Of course, Kylie herself was there, wearing a plunging white dress and her hair in an updo. Kylie brought her four-year-old daughter, Stormi Webster, to the event, and the toddler looked adorable in a silver dress, as well. Plus, Kendall Jenner stunned in a colorful dress, Khloe Kardashian channeled Barbie in a pink suit, and Kourtney Kardashian was there with her man, Travis Barker.

Kim split from her boyfriend of less than a year, Pete Davidson, earlier this summer. The two were extremely hot and heavy over the spring, even attending the Met Gala together in early May. However, they broke up while Pete was in Australia filming a new project. Kim has not publicly spoken about the breakup.

In just a few weeks, on Sept. 22, a new season of The Kardashians will premiere on Hulu. Pete showed up in a brief scene for the season 2 trailer, but is not expected to appear on the show in much more of a capacity than that. Season one left off with Khloe finding out about Tristan fathering a baby with another woman, which was in December, so there’s certainly a lot of ground to cover when the series returns!