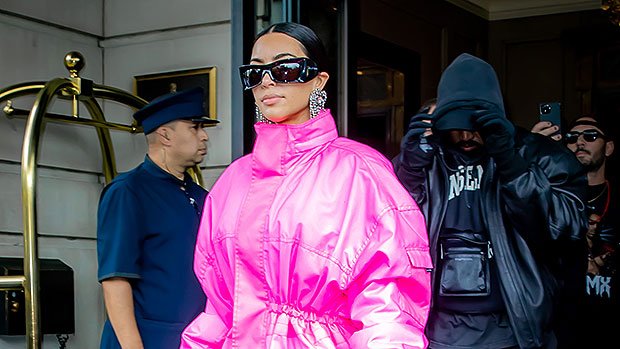 Kim Kardashian was a Barbie doll in her latest look! The reality star, 41, rocked the design house’s skintight pink pant-leggings along with a matching cropped logo hoodie in Los Angeles on Sunday, May 29 in the images published by the DailyMail. Of course, her bleach blonde hair — which she’s still rocking from the Met Gala earlier this month as part of a Marilyn Monroe look — added to the Barbie vibe of the look. She accessorized with a matching pink Hourglass handbag from the label, worth $2200, and 90s-inspired silver sunglasses.

She was spotted heading to the Ripley’s Believe It Or Not! museum on Hollywood Boulevard, adjacent to both the iconic Hollywood Wax Museum and next door to the Guinness World Records Museum on the same block. Notably, Kim has been working with Ripley’s in recent months: she borrowed Marilyn’s original 1962 “Happy Birthday, Mr. President” gown from the Orlando location for the Met Gala. It’s unclear what Kim’s visit to the Hollywood location pertained to.

Kim wasn’t allowed to make any alternations to the historic piece, designed by Jean Louis and sketched by his then-assistant Bob Mackie. The Kardashians on Hulu star dramatically lost 16 pounds in just three weeks by cutting carbs and sugar to squeeze into the dress, which she wore for just minutes on the red carpet before changing to a replica. She also underwent a 14-hour hair makeover for the event, taking her locks from black to bleach blonde.

The mom-of-four recently signed on to be the face of French label Balenciaga, which is under the creative direction of designer Demna (also a close friend of her ex Kanye West). In the ad campaign, which was shot at Kim’s Hidden Hills home, the star rocked the same pink pant-leggings with a red version of the hoodie while taking a selfie. The pant-legging has been a staple for Kim in recent months, which she wore non-stop in black last fall, along with brown, blue, and several hot pink versions in spandex and crushed velvet.

Kim Kardashian & Ray J’s Relationship Through The Years: From Dating To Sex Tape Scandal To Today