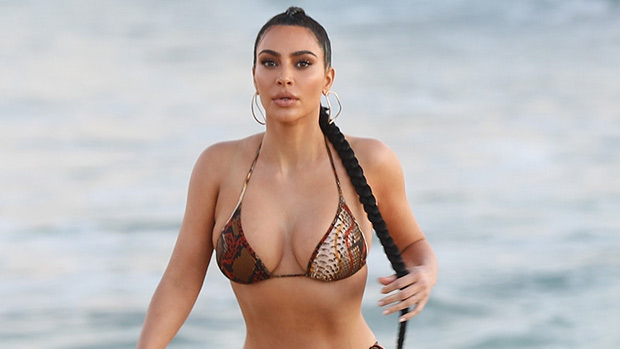 Kim Kardashian, 41, just turned SKIMS upside down with her latest campaign! The founder and CEO modeled several gold and silver bikinis from the latest metallic swim collection in a new ’70s inspired campaign dropped on Friday, July 1. In one photo she was seen catching rays poolside in a tiny gold bikini. In another video, Kim takes a call next to a white poodle as she rocked a sporty top with a mini sarong, showing off her blue eye shadow and voluminous blonde hair — just like the late Farrah Fawcett‘s in Charlie’s Angels.

In other shots snapped by the talented Nadia Lee Cohen, Kim showed off a high cut monokini with a cut out in the middle as she headed to the pool with two gal pals (one in a bikini and another in metallic bike shorts). Kim’s solo post racked up 1.9 million likes in less than a day, with influencer Kristina Zias declaring, “Yeah I’m gonna need immediately.” Fans won’t have to wait long, as The Kardashians on Hulu star confirmed the hot new collection (no pun intended) is dropping on July 6 at 9 am PT/noon ET — mark your calendars.

Kim has been seemingly teasing the latest SKIMS Swim addition for a few days, starting with her “Lazy Sunday” post last weekend. In the throwback shot, the mom-of-four was seen wearing a strapless silver top and bottom as she floated in the ocean with sunglasses on.

Hours before the collection was announced via Instagram and her SKIMS newsletter, she also posted a selfie of a silver bikini on July 1 from her vacation in the Turks & Caicos with Pete Davidson, 28. “SOON,” she simply wrote — and she wasn’t lying, as the campaign imagery dropped shortly after.

The star released the first SKIMS Swim extension in spring of this year with a slew of mix-and-match styles for all body types, as well as a vast collection of neutrals and a bright blue. Curiously, Kim actually wore a silver bikini top and matching leggings to the launch party in Miami, despite neither being part of the original collection — so it appears she’s been working on the SKIMS Metallic Swim for some time.