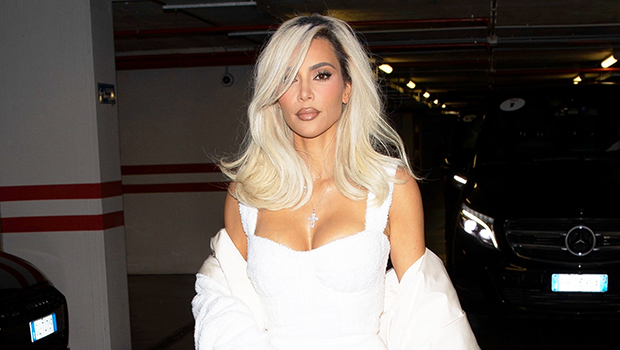 Blondes do have more fun – ask Kim Kardashian. Months after Kim, 41, donned Marilyn Monroe‘s famous “Happy Birthday, Mr. President” gown for the 2022 Met Gala, the Kardashians star seemed to channel the late glamour icon while visiting Milan for Fashion Week. Kim wore a white Dolce & Gabbana mini dress made of fluffy material and a built-in corset. She paired the look with a matching cream-colored coat and fluff-covered pumps. Kim’s blonde locks hung around her shoulders, with a pair of crucifixes dangled above her cleavage.

The look arrives on the heels of Kim’s new advert with  Italian fashion label Dolce & Gabbana. “An appetizer before the show,” Kim captioned the video she posted to Instagram on Sept. 22, per Footwear News. In the black-and-white video, a blonde Kim – wearing a form-fitting black dress with a floral pattern and corset top – lounges in the back of a limousine while the paparazzi take photos. She opens a pizza box bearing the “D&G” logo to have a snack. This was a teaser for D&G’s Spring 2023 runway show during Milan Fashion Week and the upcoming “Kim Dolce & Gabbana” collab.

Earlier this year, Kim turned heads when she wore the Jean Louis gown that Marilyn sported when she sang “Happy Birthday” to President John F. Kennedy in 1962. The move was arguably the biggest moment of the 2022 Met Gala, but not everyone was a fan. “I thought it was a big mistake,” said Bob Mackie, the legendary designer who had a hand in creating the dress. “[Marilyn] was a goddess. A crazy goddess, but a goddess. She was just fabulous. Nobody photographs like that. And it was done for her. It was designed for her. Nobody else should be seen in that dress.”

Kim worked with Ripley’s Believe It Or Not Museum, which obtained the dress after it was sold for $4.8 million at Julien’s Auctions in 2016, for the fashion moment. To make the fashion moment work, Kim had to drop 16 pounds in three weeks. She did so by strict dieting and exercise,  a move she defended. “I didn’t do anything unhealthy,” she said in an interview after the Gala. “To me, it was like, ‘Okay, Christian Bale can do it for a movie role, and that is acceptable.’ Even Renee Zellweger gained weight for a role. It’s all the same to me.”