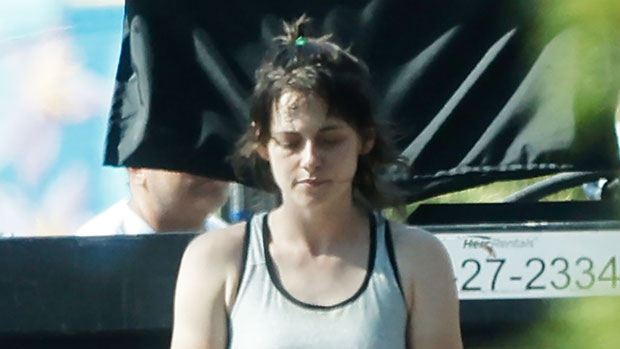 Kristen Stewart is always messing around with new looks and hairstyles so we were not surprised when she debuted a brand new mullet hair makeover while filming her new movie, Love Lies Bleeding, on June 29 in Albuquerque, New Mexico. The 32-year-old looked totally different when she rocked a dark brown mullet with front bangs.

Kristen rocked a tight gray tank top lined with black around the scoop neckline while filming a scene for the movie. Her mullet was blowing in the wind, but you could clearly see her choppy new ‘do which featured short front bangs and short pieces on the sides of her face.

Kristen is not new to the mullet hairstyle, in fact, she played the role of Joan Jett in the movie The Runaways, which was released in 2010. For the role, she dressed and looked exactly like the musician, who sported a jet black mullet. Kristen rocked the voluminous hairstyle along with some dramatic makeup for the role, and she killed it.

Just the other day, Kristen attended the Crimes of The Future premiere in NYC when she rocked quite a different hairstyle. She had platinum blonde hair with dark black roots and it was super long. She threw her hair up into a messy, wavy ponytail, adding a lot of volume to the top of her head.

Her look from the premiere was a total 180 from her recent mullet, and just a few months ago, Kristen had been sporting a strawberry blonde hair color which she would play around with. At first, she cut her hair short, but then she let it grow out, before switching over to blonde.

Kristen Stewart’s Girlfriend: Everything To Know About Her New Fiancée, Dylan Meyer