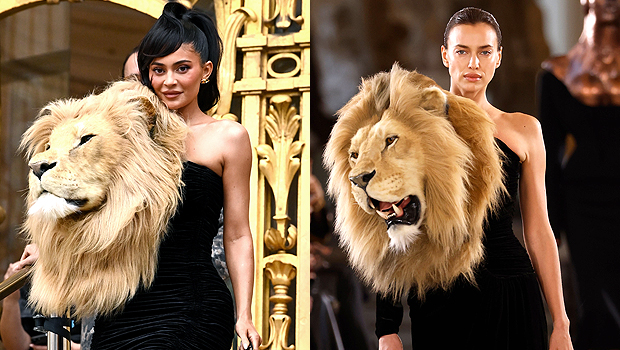 Kylie Jenner is going viral on social media for her reaction to Irina Shayk walking the runway at the Schiaparelli Haute Couture Show on Jan. 23. Irina hit the catwalk in a one-shouldered black dress from the designer, which was accessorized with a giant faux lion’s head on one shoulder. Kylie wore the same exact look, sporting a strapless black dress with the lion’s head. However, while Kylie’s faux lion head had its mouth closed, Irina’s was baring its teeth.

Kylie wearing the Schiaparelli dress before it hit the runway pic.twitter.com/GeQQqb9API

Kylie kept a straight face as she watched Irina model the outfit from the front row. She had an unamused look on her face as she eyed the model from head to toe. Kylie could be seen bobbing her head to the music with her face in a blank stare.

However, the makeup mogul didn’t seem to have any ill will when she posted about the look on Instagram after the show. She called the look “Beauty and the Beast” and thanked the designer for a “special morning” at the show, making no mention of Irina. “I loved wearing this faux art creation constructed by hand using manmade materials,” Kylie gushed.

While the look received some backlash for how life-like the lion looked, Irina also raved about the ensemble on Instagram. Like Kylie, she pointed out how much hard work went into creating the intricate accessory. “I support these incredible artists who worked tirelessly with their hands, using wool, silk and foam to sculpt this embroidered lion, an image of pride, an image that @schiaparelli invokes while exploring themes of strength,” she wrote. “I am honored to have been called on as well to lend my art as a woman to this.”

It’s unclear whether or not Kylie and Irina actually interacted at the show. Interestingly, Irina was previously romantically linked to Kylie’s former brother-in-law, Kanye West, in 2021. However, their fling fizzled out, and Irina has been back to spending quite a bit of time with her ex, Bradley Cooper, these days.