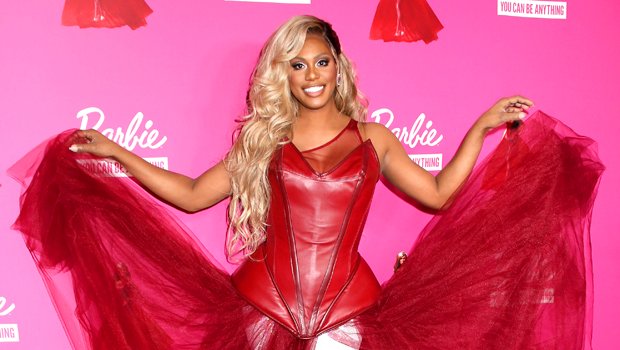 Laverne Cox was the star of the show at her 50th birthday party when she dressed up as her new Barbie doll. Laverne’s party was at the Moxy Hotel rooftop in NYC on May 26, and she slayed the pink carpet in a sheer red tulle dress with a tight red leather corset on top, as she posed with her Barbie doll, which was in the same outfit.

Laverne’s one-shoulder sheer red tulle gown featured a poofy skirt with a plunging slit on the front that revealed her tight white sequin, pointed-toe pant boots. On top of her dress, Laverne wore a fitted red leather corset top, and later on in the evening, she ripped it off to reveal her second outfit of the night.

Laverne’s second outfit featured a low-cut sweetheart neckline white sequin jumpsuit that revealed ample cleavage, with the sheer red tulle dress on top. As for her glam, she had her long platinum blonde hair down in voluminous curls.

Laverne’s Barbie doll has the same outfits as the ones she wore to her party and she dished to People about how excited she is about teaming up with Mattel, “I can’t believe it. I love her outfit. What excites me most about her being out in the world is that trans young people can see her and maybe get to purchase her and play with her, and know that there’s a Barbie made by Mattel, for the first time, in the likeness of a trans person.”