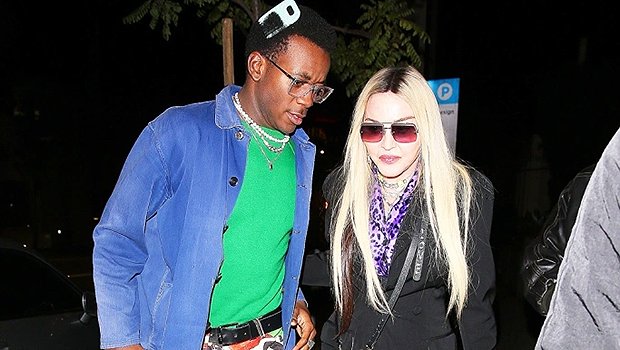 Madonna has clearly passed down her sense of style to her son David Banda. The 16-year-old wore a tight red T-shirt dress to the World Lightweight Championship at Barclays Center in New York City on May 28. Madonna, who adopted her son in 2006, documented the duo’s fabulous looks in several photos she shared to Instagram at the end of Memorial Day Weekend.

In addition to his red dress, which is from the Adidas x Gucci collection, David also sported striped white socks, a pair of black sneakers, and gold-rimmed sunglasses. He further accessorized his look with a few chain necklaces and a black bag that he wrapped around his shoulder for the event.

Madonna, meanwhile, looked gorgeous in an oversized black and white tracksuit from Adidas x Gucci. She posed with David for some cute close up shots at the boxing match. In a full-body photo that Madonna shared, the “Material Girl” hitmaker and David showed off their complete looks and the teenager lifted up his dress to pop out his leg to the side.

Madonna: See Photos Of The Singer

“Family fight night. 🥊♥️🥊♥️🥊♥️ #davidbanda #boxing,” Madonna wrote in her caption. The “Queen of Pop” used a hashtag to mention her son rather than tagging him, since he isn’t on Instagram. The pair seemed to have a great night out together watching boxers Gervonta Davis and Rolando Romero face off.

This wasn’t the first occasion that Madonna’s son wore a dress. David dressed in a long, flowing white silk dress in a video that his famous mom shared in May 2021. Madonna captioned the clip, “Confidence is Everything,” seemingly in reference to her son’s fearless sense of style. Madonna’s 25-year-old daughter Lourdes Leon is also an up and coming fashionista. Clearly, Madonna’s children have learned how to dress well thanks to the superstar performer.