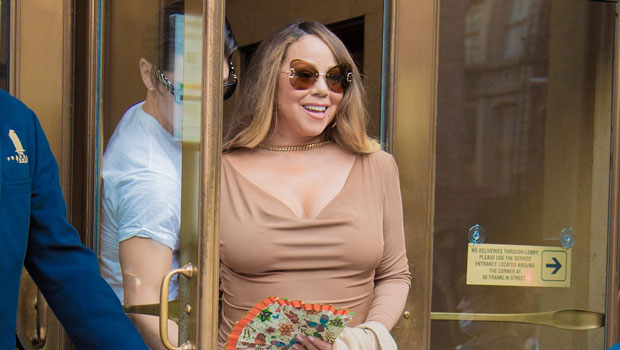 Mariah Carey glowed on a rare public outing in New York City. The singer, 53, rocked a long beige dress with a low neckline as she stepped out with her boyfriend Bryan Tanaka, 39, on Saturday, Aug. 27. The public outing marks the first photos of the Glitter star since news emerged that her ex-husband Nick Cannon, 41, is expecting his 10th child with model Brittany Bell. Notably, Mariah and the former America’s Got Talent host share s 11-year-old twins Monroe and Moroccan.

The GRAMMY winner kept her blonde highlighted hair down and in a sleek blow out as she exited a Manhattan building, smiling for waiting photographers. She also revealed her on-trend platform Gucci slides as she stepped forward, featuring the brands signature beige GG monogram in various sizes. The New York native added a butterfly pair of sunglasses with a rhinestone detail, and held onto a beige sweater and floral print fan to stay cool. Meanwhile, Bryan — who is one of her back-up dancers — was spotted behind her in a blue t-shirt, black shirts and a pair of leather slip-on sneakers.

Nick confirmed via Instagram that he’s going to be a father for the 10th time on Wednesday, Aug. 24. “Time Stopped and This Happened…” he captioned a photo from what appears to be a maternity photoshoot, with Brittany showing off her growing bump. The pair are also parents to son Golden, 5, and daughter Powerful Queen, 1. Nick is also imminently expecting his ninth baby with Abby De La Rosa in the coming weeks, who he has twins Zion Mixolydian and Zillion Heir, 1, with. The dad-of-eight has had his hands full with a newborn, too, as partner Brie Tiesi just have birth a month ago to their baby boy. Sadly, Nick’s son with Alyssa Scott, Zen, passed away at just five months old in Dec. 2021 after being diagnosed with brain cancer.

Mariah has not commented on news that Nick is expecting more children, particularly a 10th baby, but Nick has been clear that his desire for many kids is intentional. “I’m having these kids on purpose. I don’t have no accident!” he said on Power 106 Los Angeles in July. “Trust me, there’s a lot of people I could’ve gotten pregnant that I didn’t. The ones that got pregnant are the ones that were supposed to get pregnant. … You only live once,” he also said.

Nick and Mariah married after a whirlwind romance in the Bahamas in 2008, and welcomed their only kids — and Nick’s first — in April 2011. The pair split in 2014, and finalized their divorce in 2016. The actor and comedian has open in the past that he “messed up” with his “dream girl” Mariah, and admitted she “ain’t coming back” now that he has so many more kids. When speaking about the song “Alone” on his talk show in Feb. 2022, he explained: “The song wasn’t really about trying to get her back. It was taking ownership of what I did as a man and owning my flaws and expressing it through song.”