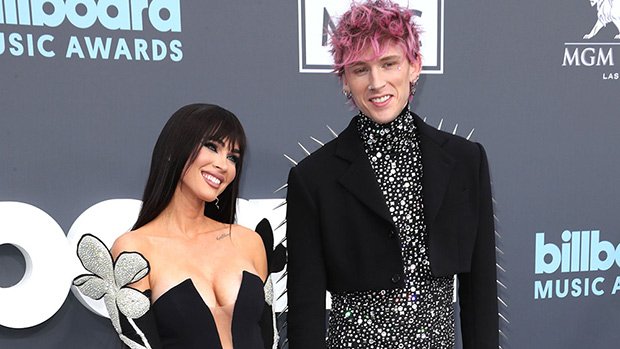 Megan Fox was a beacon of light at the 2022 Billboard Music Awards on May 15. The gorgeous actress walked alongside her fiancé, Machine Gun Kelly, on the red carpet outside the MGM Grand Garden Arena in Las Vegas, wearing a figure-hugging black dress with a super low-plunging neckline. She accessorized with long black gloves and clear pumps. Both gloves featured a beaded flower stem and leaves growing up their sleeves with the actual flower portion jutting off the gloves and covering her shoulders. The Transformers star’s hair was straight, and she rocked fringed bangs.

Machine Gun Kelly also wore a black ensemble, rocking tight black pants and a black cropped suit jacket with a silver-studded black shirt underneath. His pointed leather shoes were lined with silver studs as well. Both his pants and blazer were embellished with silver spikes. The “Bloody Valentine” singer completed his look with gloves that matched his sparkling shirt.

Megan and Machine Gun Kelly weren’t expected to attend the show, but he was added to the lineup of performers when the Red Hot Chili Peppers dropped out of the show “due to unforeseen circumstances”. This will be MGK’s first time performing at the Billboard Music Awards, and it comes just after the release of his latest album, Mainstream Sellout, in March. He’s also a finalist in the top rock artist category. He previously won the award in 2021 along with top rock album for 2020’s Tickets to My Downfall.

Megan and Machine Gun Kelly most recently walked the carpet at the Good Mourning premiere on May 12. She wore a pink sparkly gown with a thigh-high slit, platform open-toed heels and gorgeous earrings, while he matched in a hot pink silk suit with a rose pattern and two-tone black and white shoes.

Megan and Machine Gun Kelly have been engaged since January 2022, and they’ve been lighting up red carpets all over Hollywood ever since.

Rauw Alejandro: 5 Things To Know About The Puerto Rican Singer Performing At BBMAs