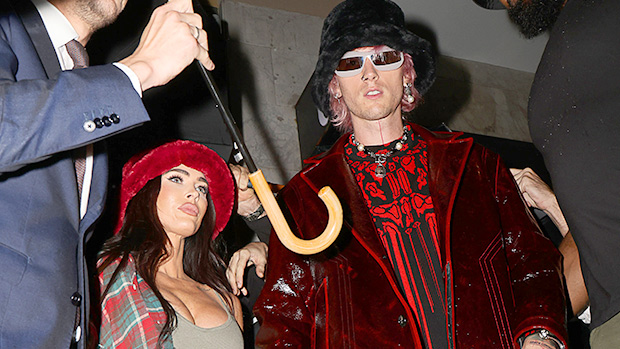 Megan Fox, 36, didn’t let us down with her outfit choice on the final night of Milan Fashion Week on Monday, September 26. The actress rocked a green tank top, dark green cutout pants, and an oversized plaid red and green button up shirt that she draped over one of her shoulders. Megan also sported a stylish fuzzy red bucket hat and a pair of open-toed gold heels.

The Transformers star stepped out with her husband Machine Gun Kelly, 32, in Italy. MGK copied his wife by wearing a black fuzzy bucket hat. The “Papercuts” singer followed Megan’s red look with a burgundy trench coat that he wore over a black and and red sweater. MGK finished off his look with a pair of black pants and white sunglasses.

The couple went to dinner in Milan with MGK’s 13-year-old daughter Casie. The teenager wore a black puffer jacket and a pair of ripped denim jeans. Casie also rocked a black hat and beige Yeezy Foam Runners. MGK and Megan adorably held hands as they strolled with his only child to Da Giacomo restaurant.

Megan and MGK have been pretty quiet lately, since they’ve been away on his Mainstream Sellout Tour which ends October 12. The couple’s under-the-radar behavior caused fans to think they broke up, but that’s obviously not the case. HollywoodLife confirmed in August that the engaged duo are still madly in love and are moving forward with their wedding plans once MGK’s tour wraps up.

“They are far from breaking up and still fully planning on getting married, but right now the major focus is on his tour which goes until mid-October,” the source shared. They also confirmed that MGK and Megan “joke about running off to Vegas and eloping” instead of having a traditional wedding ceremony.