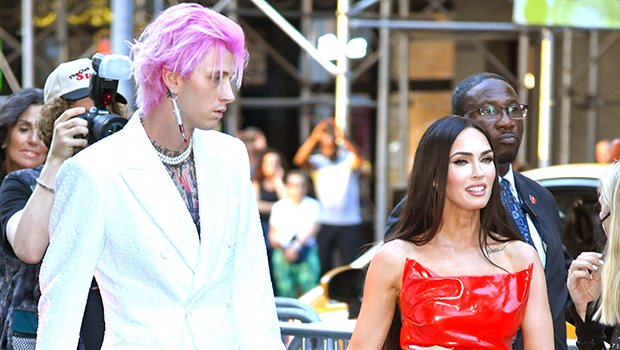 Megan Fox looked red hot in a red leather dress alongside fiancé Machine Gun Kelly at the Tribeca Film Festival in New York. The couple appeared on the carpet for the June 9 premiere of “Taurus,” their newest film together. The actress, 36, stunned in the figure-hugging strapless dress that she paired with black and silver heels. She wore her brunette hair straightened and kept it behind her back. The Transformers actress did not appear to be wearing the $400,000 engagement ring she received upon MGK’s proposal in January.

Machine Gun Kelly, 32, wore a white suit made of a fuzzy material. He matched it with white high-top sneakers and his pink hair gave the look a pop of color. He wore no shirt underneath, letting his chest tattoos shine through. He accessorized with rings, a bracelet, a pearl necklace, and a mismatched pair of earrings. The earring on his right ear was a needle with (presumably fake) blood in it. A drip of fake blood hung from the top of the needle.

The needle and blood earring suits the rockstar, as he and Megan have been open in the past about consuming each other’s blood. “Yeah. So, I guess to drink each other’s blood might mislead people or people are imagining us with goblets and we’re like Game of Thrones, drinking each other’s blood,” Megan explained when asked about the rumors of the occurrence between the two lovers in an April interview with Glamour UK. “It’s just a few drops, but yes, we do consume each other’s blood on occasion for ritual purposes only,” she confirmed. In May 2021, MGK admitted he wears a vile of Megan’s blood around his neck. It was originally gifted to him early on in their relationship so he knew Megan was serious about him.

Megan and MGK’s film “Taurus” debuted at the Berlin Film Festival in February and was afterward purchased by RLJE Films, according to Deadline. The film centers around “a rising but troubled musician who spends his days and nights searching for the inspiration to record his next song,” per the outlet. Megan plays his ex-girlfriend, who is no good for him.

Megan and MGK attended the premiere of their movie Good Mourning in May in Los Angeles and matched in pink ensembles. Megan wore a sparkling, light pink, strapless gown with a sweetheart neckline. The “Bad Things” singer donned a hot pink silk suit that was covered in roses. The pair first met on the set of their 2021 film, Midnight in the Switchgrass. Since then, they continued working together on various projects as their love for each other grew. How sweet!