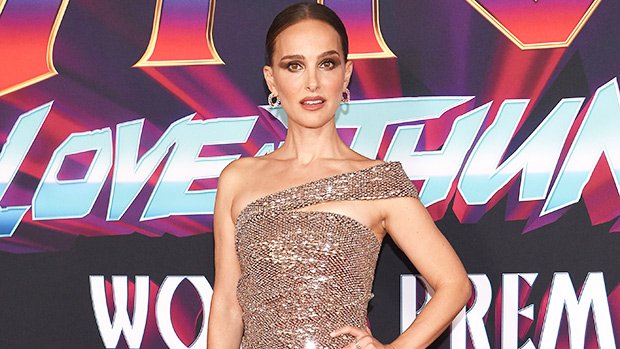 Sent from above! Natalie Portman radiated pure star power during the red carpet premiere of Thor: Love and Thunder in LA on Thursday Jun. 23. The actress, who returns to the role of scientist Jane Foster in the latest Thor, stunned in a tiny metallic dress by Celine Couture as she took the red carpet by storm with her co-stars.

Natalie’s sparkling dress was made from champagne-hued beading and featured one narrow strap across her chest for some fashionable angles. She teamed her short dress, which looked as if it could have been made of lightning, with metallic Jimmy Choo heels. Adding more sparkle, the Star Wars actress donned diamond Anita Ko hoop earrings and several statement rings.

Natalie evoked some superhero style with edgy makeup. She teamed bold swipes of brown eye makeup with a deep cocoa lip, and slicked her chocolate brown hair back into a neat, low ponytail.

Thor: Love & Thunder is the latest addition to the Marvel Cinematic Universe, set to come out Jul. 8, 2022. In addition to Natalie, the comic book flick also features appearances from Tessa Thompson as Valkryie, Jamie Alexander as Sif, Jeff Goldblum as Grandmaster, Chris Pratt as Peter Quill/Star-Lord, Karen Gillan as Nebula, Pom Klementieff as Mantis, Dave Bautista as Drax, Sean Gunn as Kraglin, and Vin Diesel as Groot. Christian Bale has joined the cast as the villain Gorr the God Butcher while Russell Crowe will make a cameo appearance as Zeus.

In this Thor, Natalie’s character Jane is who yields Mjolnir, the legendary hammer. The actress had the challenge of getting super buff for the role, which she talked about with Variety. Comparing the part to her Oscar-winning transformation in 2010’s Black Swan, the 5’3″ tall star said, “On Black Swan, I was asked to get as small as possible. Here, I was asked to get as big as possible. That’s an amazing challenge, and also state of mind as a woman.”

Natalie Portman In ‘Thor’: From Scientist & Love Interest To Superhero, Her Marvel Journey So Far