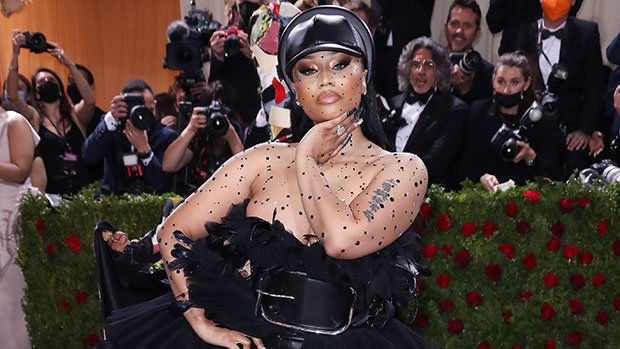 After missing last year’s Met Gala due to contracting COVID-19, Nicki Minaj made her return to fashion’s biggest night of the year on Monday, May 2. The “Queen of Rap” arrived to the annual event in New York City in a massive black ball gown with a matching cap. She had jewels bedazzled on her face, chest, and arms. Nicki, 39, also rocked long nails. Her entire look was by Italian fashion designer Riccardo Tisci, whom she walked the carpet with rather than her husband Kenneth Petty.

Nicki told red carpet host La La Anthony how much she loves her hat. In fact, Nicki revealed, “I didn’t wanna do the look if i couldn’t do the hat.” She also joked that the only “unplanned” part of her look was that her “boobs were popping out.” “They made my cup size a little small,” the singer said.

There was lots of controversy regarding Nicki’s COVID diagnosis last year. The superstar rapper revealed at the time that she was not vaccinated against the virus and wasn’t getting it due to a very bizarre claim that her cousin’s friend became “impotent” and had “swollen testicles.” Nicki tweeted, “My cousin in Trinidad won’t get the vaccine cuz his friend got it & became impotent. His testicles became swollen. His friend was weeks away from getting married, now the girl called off the wedding. So just pray on it & make sure you’re comfortable with ur decision, not bullied.”

Dr. Terrence Deyalsingh, the health minister of Trinidad and Tobago, later spoke out against Nicki and denied her claims. Dr. Anthony Fauci also weighed in on Nicki’s anti-vaccine stance and said that she was “spreading misinformation.” Nicki seemingly got the jab at some point afterwards, considering she was able to attend the Met this year.

The “Super Bass” hitmaker made some memorable appearances at the Met Gala before. She dressed in a lavish, fairy-tale inspired gown paired with strappy lace-up heels for the 2019 “Camp” theme Me. In 2018, Nicki stunned in a Oscar de la Renta red gown that perfectly represented the ‘Heavenly Bodies’ theme.