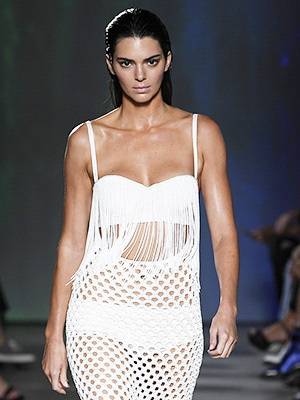 Supermodel Kendall Jenner had her breakout in the high fashion modeling world in 2014. She has since walked in shows for brands like Chanel, Givenchy, Marc Jacobs, Balmain and many more during Paris, New York and Milan’s Fashion Weeks. Kendall has shot campaigns for Calvin Klein, Estee Lauder, Marc Jacobs and Fendi, among numerous others. She and her younger sister, Kylie Jenner, co-published a book called Rebels: City Of Indra in 2014, and have their own Kendall + Kylie clothing line. Kendall has also worked as a photographer. Meanwhile, Kendall was announced as the highest paid model of 2018 by Forbes, raking in a whopping $22.5 million. Aside from walking the most highly coveted designer runways, Kendall also walked the exlcusive Victoria’s Secret Fashion Show runway twice — once in 2015 and again in 2018. We rounded up all of Kendall’s best runway looks and you can click through the gallery to see them all!