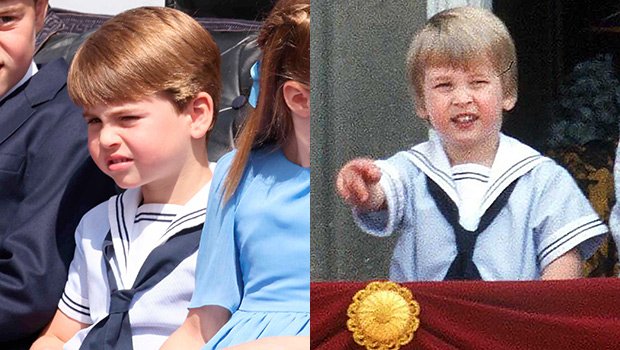 Louis actually made his debut at the Trooping the Colour Parade in 2019, but appeared only on the Buckingham Palace balcony and not in the carriage. He wore the same blue-and-white shirt with matching shorts that his uncle Harry had on at the 1986 event, which his late mother Princess Diana attended.

For the 2022 Trooping the Colour Parade, which kicks off Queen Elizabeth II‘s Platinum Jubilee celebrations, Louis gleefully rode in the carriage with his siblings. He sat in between George and Charlotte, who all matched in blue. The royal trio were joined by their mom Kate, 40, and grandmother Camilla, Duchess of Cornwall, in the first carriage. William, meanwhile, marched with other soldiers in the procession.

Prince George, Princess Charlotte, and Prince Louis are reportedly expected to have a more “visible” role in the Platinum Jubilee events, which run through June 5. The celebrations will also mark the first time that The Duke and Duchess of Cambridge’s kids and their cousins Archie, 3, and 1-year-old Lilibet are all together for the first time. Archie and Lilibet have been living in California with Harry and Meghan Markle, 40, but the family of four are traveling across the pond to celebrate the Queen.