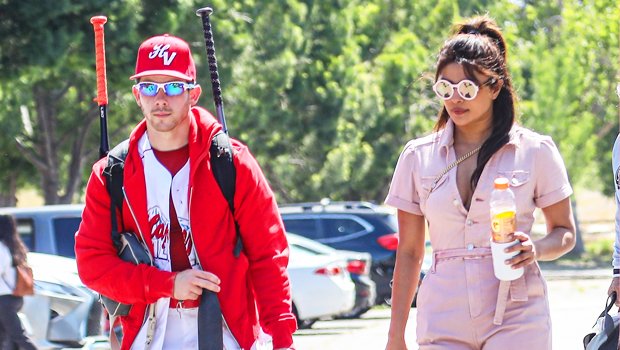 Priyanka Chopra was a doting wife to her husband Nick Jonas at his baseball game on May 22. The actress, 39, wore a chic pink jumpsuit and a matching pair of sunglasses to the game in Encino, California. She also rocked a pair of white sneakers and had a small strap purse wrapped around her back. Priyanka helped out her handsome husband by carrying one of his baseball bats and his orange Gatorade in her hands.

Nick, 29, was dressed in his white softball uniform and a red hat and sunglasses. He walked side-by-side with his wife, holding several accessories for his game including a water bottle while sporting a backpack with bats. Priyanka’s supported Nick at his baseball games before, and every time the Quantico star looks so stylish.

As fans know, Nick and Priyanka welcomed their first child, a daughter named Malti via surrogate in January. The famous couple posted the first image of their daughter with her face covered by an emoji to social media on May 8, revealing that baby Malti spent 100 days in the NICU.

“We are overjoyed that our little girl is finally home,” they said, thanking the doctors and nurses who helped their daughter during the difficult journey. “Our next chapter begins now, and our baby is truly a bada**. Let’s get it MM! Mommy and Daddy love you,” Nick and Priyanka added.

In a recent interview on The Tonight Show, Nick told Jimmy Fallon that Priyanka enjoyed a low-key celebration for her first Mother’s Day. He also revealed that he gifted his wife a citrus tree, which represented “new life and new things growing.” The “Jealous” singer went on to say, “Our little girl’s home and it’s been amazing. What a gift.”