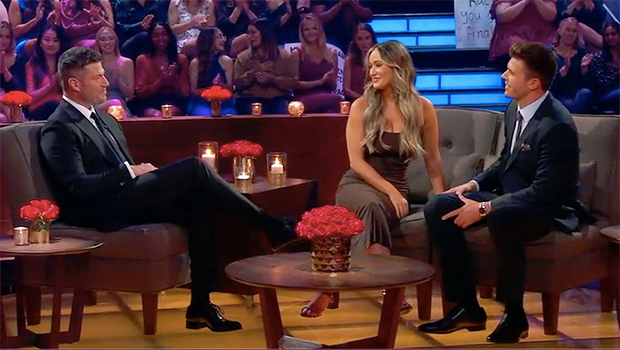 Rachel Recchia had a lot of ups and downs on this season of The Bachelorette, and she returned to discuss them during the After the Final Rose live special. The season 19 ATFR first aired during part one of the finale on Sept. 13. Rachel looked absolutely incredible in her post-show look. For the special, she wore a skintight, dark grey dress, which she paired with her hair styled in loose curls.

Part one of After The Final Rose was Rachel’s first time coming face-to-face with Zach Shallcross after their breakup in Mexico on The Bachelorette. Zach was one of Rachel’s final three guys, and even though he told her he was in love with her, things took a turn for the worst during their fantasy suite date. The trouble started during a conversation that happened off-camera.

Afterward, Zach shared that he felt Rachel was being “inauthentic” during their overnight date. He also revealed that she had begun questioning whether or not he was ready to commit to marriage. The conversation left Zach feeling unsettled, and he decided to leave the show during the final three rose ceremony. That left Rachel with just two guys — Tino Franco and Aven Jones — left. However, she and Zach apologized to each other about how things went down during ATFR.

When the season started, Gabby and Rachel were choosing from the same pool of men. However, after a couple of rose ceremonies, they decided which guys they wanted to individually pursue, putting them on their own separate journeys. They were still able to lean on each other as they faced the ups and downs of the process, though.