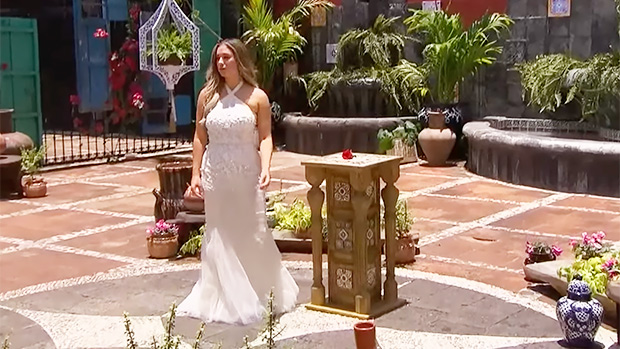 After a season of major ups and downs, Rachel Recchia will attend one final rose ceremony during the Sept. 20 premiere of The Bachelorette. Previews for the final episode revealed Rachel’s stunning look for the last rose ceremony. For her possible proposal, Rachel wore a white dress with bridal vibes. The halter-style dress featured sparkling embellishments throughout the midsection. Rachel completed her look with her hair styled in waves, parted in the middle.

Heading into the finale, Rachel has just one man, Tino Franco, left. Last week, she introduced Tino and Aven Jones to her family, but she sent Aven home after he told them that he wasn’t sure he’d be ready for an engagement at the end of the show. Rachel insisted that she was blindsided by this confession from Aven, as it wasn’t what he’d previously told her. However, she admitted to being “in love” with Tino, and was ready to spend the rest of her life with him.

Whether or not Tino actually gets down on one knee remains to be seen, but previews for the finale definitely show some tension between the two. Quick clips from the sneak peek reveal Rachel accusing Tino of lying to her, and him seemingly getting frustrated in the midst of what appears to be a big fight. It’s unclear when the fight happens in regards to the timeline of the pair’s relationship (the final rose ceremony was filmed back in May).

In addition to showing what went down for Rachel and Gabby Windey at the final rose ceremony in Mexico, The Bachelorette finale will also feature live updates from the ladies in-studio. During part one of the finale on Sept. 13, Rachel came face-to-face with both Aven and Zach Shallcross during the live portion of the show. Both men apologized to her for what happened during their breakups, and they all ended on amicable terms. The season finale of The Bachelorette airs on Sept. 20 at 8:00 p.m. on ABC.