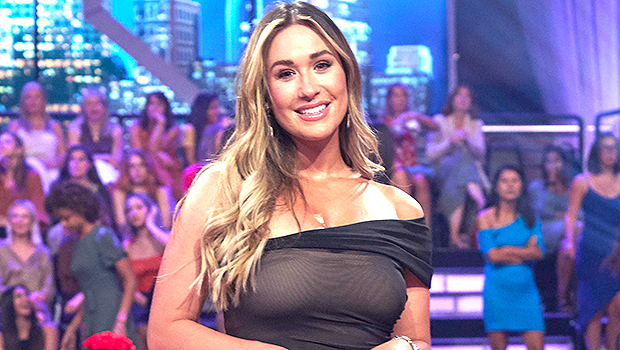 Rachel Recchia was absolutely glowing while attending the taping of Men Tell All for season 19 of The Bachelorette. The special airs on Aug. 29, and will feature Rachel and Gabby Windey facing the men they’ve sent home on the season so far. Rachel rocked a skintight mini dress for the occasion.

Her ensemble featured various colors throughout, starting with a deep black on top and fading into tanner browns on the bottom. The dress had an off-the-shoulder neckline, and she completed the look with her hair styled in loose curls. She joined Gabby and Jesse Palmer in the hot seat during the two-hour show.

Of course, Rachel’s most recent breakup that viewers got to see was when she eliminated Tyler Norris during the Aug. 22 episode. Rachel was in Tyler’s hometown of New Jersey and was expected to meet his family during the evening portion of their date. However, she realized that her connection with him wasn’t as strong as it was with the other remaining men.

As Tyler began to profess his love for Rachel at an amusement park, she had to break the news to him that she wasn’t feeling the same way. She knew how important family was to Tyler, so she didn’t want to take the important step of meeting his loved ones when she knew she was feeling unsure. Tyler took the breakup in stride, and things ended amicably between them.

Now, Rachel has three men left: Aven Jones, Zach Shallcross and Tino Franco. Her hometown date with Zach went great, while things turned a bit south at Tino’s home. Tino’s dad was skeptical of The Bachelorette process, and he did not shy away from letting Rachel know it. She left the date feeling un-welcomed by Tino’s family, even though he assured her that things went well.

The Men Tell All special will kick off with Aven’s hometown date, followed by the reunion of some of the previously-eliminated men onstage. The show will resume with Fantasy Suites on Monday, Sept. 5, before switching over to Tuesdays on Sept. 13 and Sept. 20 for the final two episodes.

Nate Mitchell: 5 Things To Know About ‘The Bachelorette’ Contestant