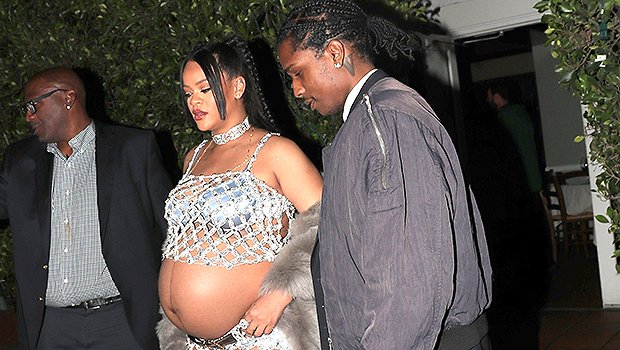 Ahead of the arrival of her first child, Rihanna enjoyed a Mother’s Day dinner with her boyfriend A$AP Rocky on Sunday, May 8. The power couple were pictured walking into Giorgio Baldi in Santa Monica, Calif., and like always, RiRi, 34, was glowing. The Grammy Award winner wore a silver crop top and miniskirt that showcased her huge baby bump. Rihanna also rocked a silver choker necklace and a pair of matching high heels. Lastly, the singer styled her dark hair in a long knotted ponytail.

As for A$AP, the 33-year-old rapper cleaned up in a grey jacket, a pair of black pants, and black dress shoes. He similarly tied his dark hair back in a ponytail, though it was much shorter than RiRi’s. The expecting parents looked so happy together for their dinner date, which should mark one of the couple’s final outings together before their baby arrives, considering Rihanna looks ready to pop!

Rihanna and A$AP confirmed they were expecting their first child together at the end of January 2022. They have not confirmed the sex of the baby or the little one’s due date, but fans are expecting Rih to give birth sometime in May. The couple reportedly had a rave-themed baby shower a studio in Hollywood on April 22, but photos were banned and so no pictured have gotten out from the event.

In early April, RiRi and A$AP traveled back to her homeland, Barbados, to see family. When they came home, A$AP was arrested at LAX in connection to a November 2021 shooting, and the rapper was released on $550,000 bail hours later. Since the arrest, Rihanna has stood by her man’s side amidst his legal troubles with countless public dinner dates.