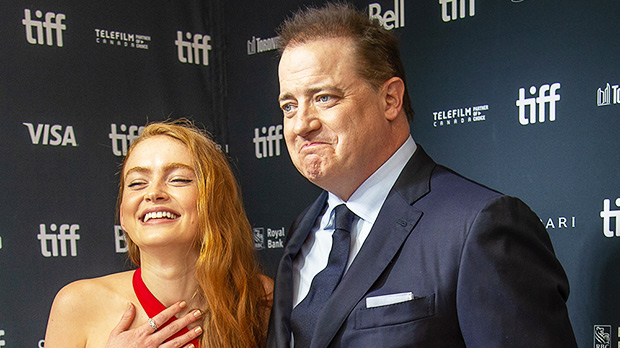 Sadie Sink lit up the red carpet once more on Sunday, Sep. 12, during the Toronto International Film Festival. The Stranger Things star, 20, looked radiant in a red Stella McCartney dress with a sexy side cut-out as she posed with Brendan Fraser, 53, ahead of a screening of their film The Whale.

All eyes were on the Texas-born actress, who wore a sleek scarlet gown that matched her beachy crimson tresses. Her dress fell to the floor straight, highlighting her long figure. The look continued with a triangular flank cut-out which put Sadie’s taut tummy on display. Her toned shoulders and arms also made an appearance via the design’s asymmetrical halter neck.

Sadie kept her accessories simple, opting for just a sparkling diamond ring by jeweler Fred Leighton. She went just as subtle with her beauty look, which included dewy skin and a flick of dark eyeliner.

She looked positively thrilled to be on the red carpet besides Brendan, who plays her estranged father in The Whale. The Mummy actor appeared overwhelmed with emotion, smiling tightly while wrapping an arm around Sadie.

After the screening, Brendan was honored with a TIFF Tribute Award statuette for his work on Darren Aronofsky’s latest. The honor, although relatively new, has been a strong indicator of Oscar success in years past.

Brendan has been receiving resounding praise for The Whale. In it, he plays Charlie, a man who is dealing with obesity and congestive heart disease, as he tries to reconnect with his estranged daughter (Sadie) and grapple with the grief of losing his partner, Alan.

Lizzo’s Most Gorgeous Performance Looks Of All Time: Her Hottest Styles Ahead Of The VMAs

During his acceptance speech, Brendan called The Whale “a redemption story,” per Entertainment Weekly. He said, “He’s gone through significant life changes and has forgotten about who he is and the ones he loves, and he’s running out of time to tell them that — if he can at all. But, he has a superpower: Charlie sees the good in others when they can’t see that in themselves, and he can bring that out in them. I’m a firm believer that we need more of that in this world. It’s the audience that gives cinema life, so I must thank you for keeping me in the job that I love because it’s nice work if you can get it.” The Whale is out Dec. 9, 2022 via A24.