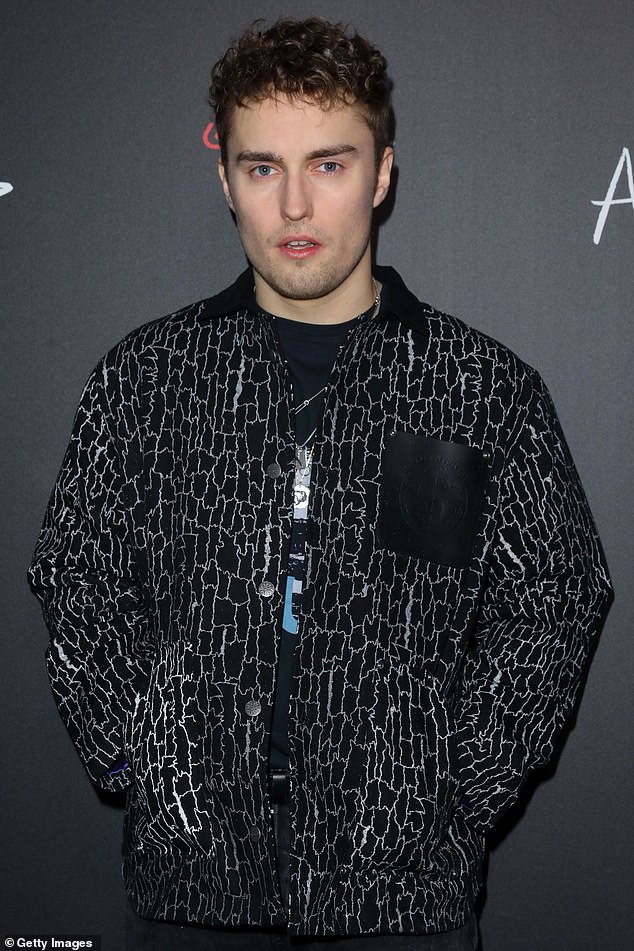 Sam Fender has apologised for referring to Johnny Depp as his ‘hero’, and has deleted a selfie with the actor which he had shared to Instagram on Wednesday.

The singer, 28, had been enjoying a pint with the Hollywood star, 58, along with guitarist Jeff Beck, 77, at The Bridge Tavern before the latter pair performed a gig in his native Newcastle.

With the snap being taken before the Golden Globe winner won his defamation case against his ex wife Amber Heard, 36, fans were quick to criticise Sam.

‘It was a poor choice of words and timing’: Sam Fender has apologised for calling Johnny Depp his ‘hero’ while deleting a selfie taken of them before his trial win (Sam pictured in March 2022)

Following the backlash, the Seventeen Going Under hitmaker wrote on the social media platform on Saturday: ‘I want to apologise.

‘I was invited to briefly meet a musical legend and an actor who has been in almost every film I’ve watched growing up.

‘I went – we chatted music and without thinking I took a photo and posted it as it was pretty surreal.

‘Using the word ‘heroes’ was meant in reference to their careers, but in the context of the trial was severely misinformed. 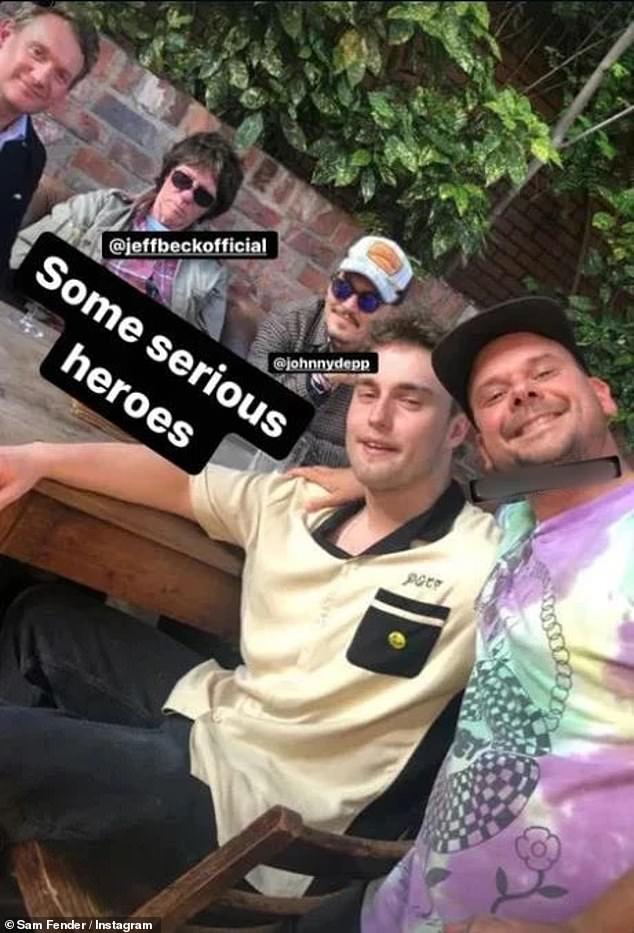 Gang: The singer, 28, had been enjoying a pint with the Hollywood star, 58, along with guitarist Jeff Beck, 77, at The Bridge Tavern before the latter pair performed a gig in Newcastle

‘I now realise that it was a poor choice of words and timing, but that’s irrelevant. It was naive and disrespectful to those who relate to any of the issues highlighted in the trial and the broader issues it poses. I didn’t think it through and I should have.’

Sam added: ‘I can’t really say anything other than that it was ill-judged and I was ignorant with regards to the trials as a whole, and thoughtless on what my post could imply.

‘I realise this entirely and for that I am deeply sorry. Sam.’

It came just hours before Johnny was awarded more than $10million after winning his defamation trial, vindicating his stance that his ex-wife Amber fabricated claims that she was abused by the Hollywood star before and during their brief marriage. 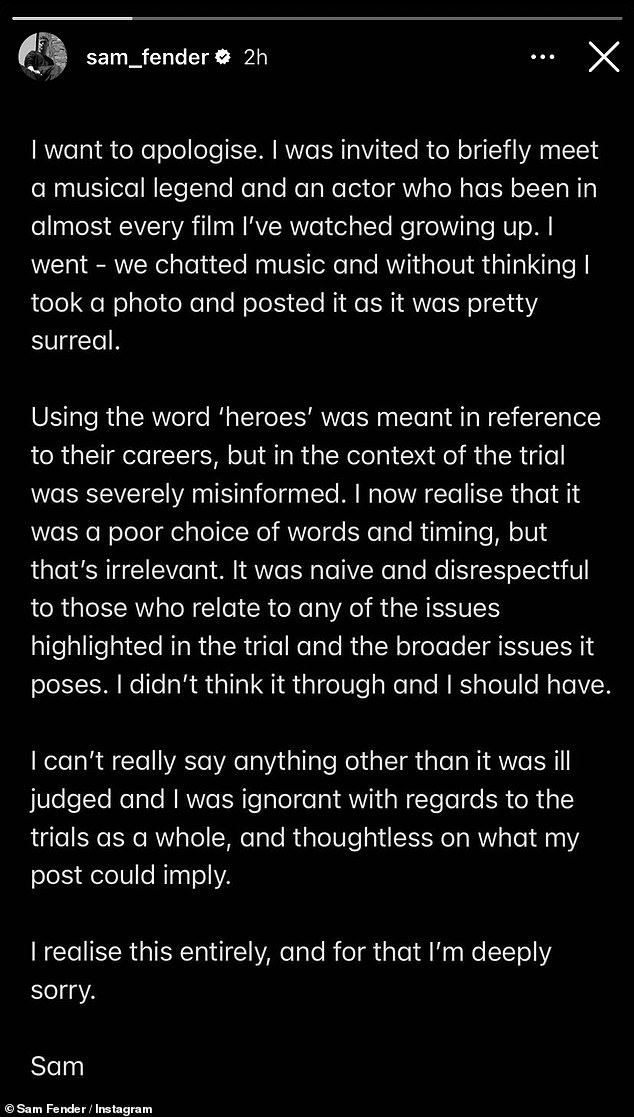 Oh dear: Following the backlash, the Seventeen Going Under hitmaker wrote on the social media platform on Saturday: ‘I want to apologise’

Speaking to Chronicle Live on Wednesday, the manager of The Bridge Tavern said Johnny was ‘incredible,’ and was at first given a private space in the establishment when he arrived at around 5pm – three hours before the verdict was announced.

‘He was the loveliest man I have ever seen in my life,’ Janine Latchford told the newspaper. My assistant is heavily pregnant and he was telling her how beautiful being a parent was. He was really down to earth, he was lovely.

‘He was incredible. He gave me a hug and I told him that I loved him pretty much as soon as I saw him! He loved the art work and he was asking questions about the Tyne Bridge. He said he’d never been to Newcastle before.’

‘He had fish and chips for dinner’, she added, while another punter said he had a soft drink to accompany his meal. 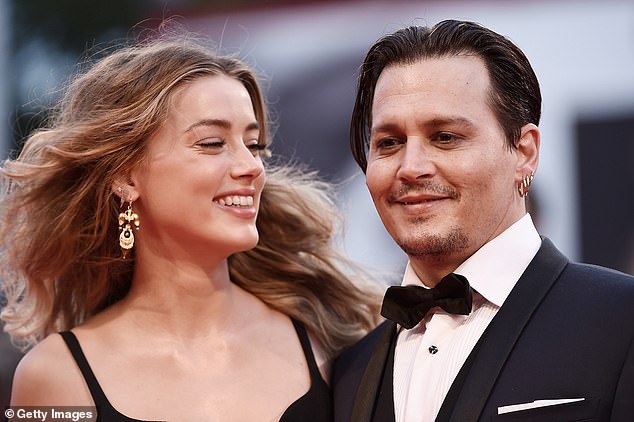 Happier times: Johnny won the defamation trial after he sued his ex-wife Amber Heard for $50million over a 2018 piece she had written that alleged she was a victim of domestic abuse (pictured in 2015)

Johnny joined Beck at the Royal Albert Hall in west London on Monday and Tuesday night after surprising fans with an appearance at Sheffield City Hall on Sunday.

He reportedly watched the conclusion to the trial via video link in the UK.

In a statement after Wednesday’s verdict, Johnny said: ‘Six years ago, my life, the life of my children, the lives of those closest to me, and also, the lives of the people who for many, many years have supported and believed in me were forever changed.

‘And six years later, the jury gave me my life back. I am truly humbled.’ 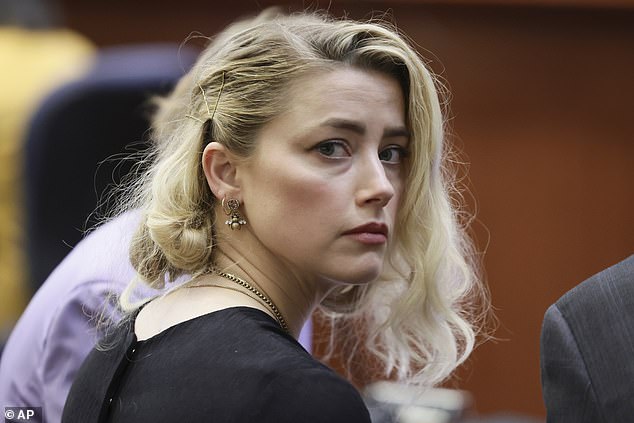 Case: Amber (pictured in court as the verdict was read), countersued for $100million claiming that Depp’s lawyer Adam Waldman made defamatory statements by calling her claims a ‘hoax’

After less than three days of deliberation, his ex-wife Amber was awarded $2million in compensatory damages out of the $100million she was seeking in her countersuit against her ex-husband. She was awarded zero dollars in punitive damages.

Buoyed by fevered support on social media and in the courtroom, Johnny believes he now has a ‘golden opportunity’ to press reset on his career.

Later this year he plans to release an album with Beck written by the two men at Beck’s home in Sussex where Johnny has been spending months at a time. He will also start making art house films.

Johnny has stayed largely silent since the verdict in the UK court, but told journalist Jason Solomons: ‘This is the golden opportunity to do exactly what I’ve wanted to do for years, which is make the films or the cinema that I want, to stay away from limitations, not allow for any unintended fingers to get into the pie, which is to say, do films that don’t need to be $300million films.’

His new career will see him starting from almost zero financially. In court in the UK in 2020, it was revealed that he had earned up to £400million across his career.

It was apparently spent on property, drugs, drink and whims such as firing the ashes of his hero, the writer Hunter S Thompson into space, which cost him £4million.

He now hopes to pick up the threads of his film career, which hit the buffers after he lost his London libel action and agreed to withdraw from the Harry Potter spin-off Fantastic Beasts: The Secrets of Dumbledore.

Despite the jury awarding him $15million, the judge reduced the $5million punitive damages award to the Virginia maximum of $350,000, reducing his total to $10,350,000 – minus the $2million he was ordered to pay Amber. In total, he walks away with $8.35million in damages. 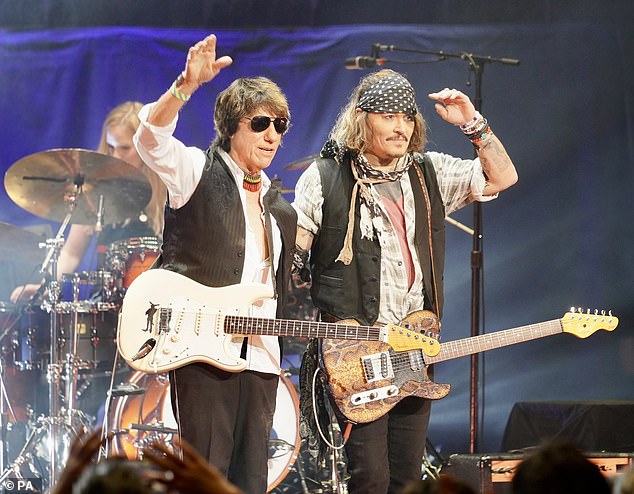 Talented: Johnny joined Beck at the Royal Albert Hall in west London on Monday and Tuesday night after surprising fans with an appearance at Sheffield City Hall on Sunday