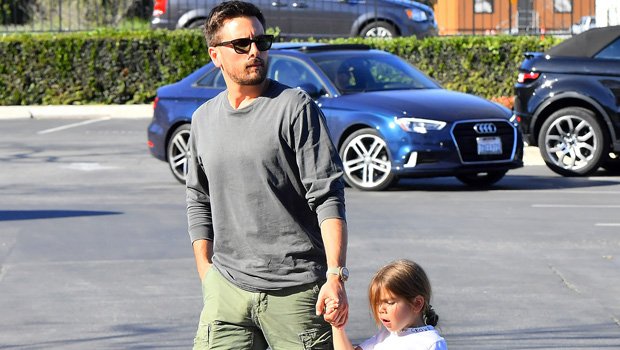 Scott Disick had a fabulous time celebrating Father’s Day with his kids and his 7-year-old son, Reign, looked adorable when he showed off his new mohawk hair makeover. Scott posted a photo of Reign in bed with the caption, “And the cut award goes to….Raymond!!!”

Reign has rocked a slew of hairstyles over the years – from a buzz cut to super long hair that he used to throw up into a ponytail, to his latest mohawk. His new hairstyle is completely shaved on the sides with a long thick mohawk down the center.

We got to see a snippet of his hair makeover last week when his mom, Kourtney Kardashian, posted a photo of him in the bathroom with his mohawk gelled and spike up and we are seriously loving his adorable new look.

For the holiday, Scott’s kids got him a cool plaid shirt with writing down the arm and Scott posted a mirror selfie with the caption, “Best gift ever. Love u kids.”

While Scott was with his kids for Father’s Day, Kourtney spent the day with her new husband, Travis Barker, and his kids. They celebrated in the backyard as she showed off a gorgeous table setting with delicious food while a massive blow-up TV screen was outside and they watched Father of the Bride on the big screen.