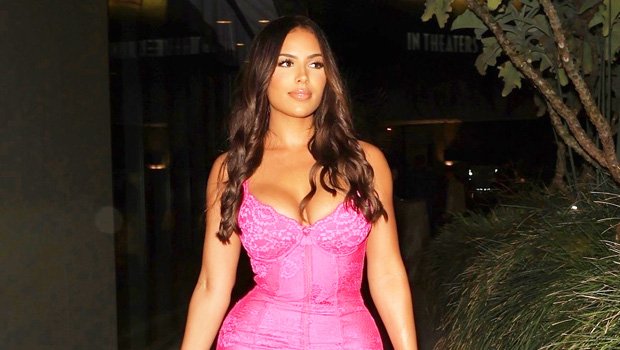 It’s no secret that Kanye West’s girlfriend Chaney Jones resembles Kim Kardashian, and Chaney proved that when she was out in West Hollywood on June 8. Chaney showed off her curvy figure in a skintight pink Balenciaga outfit featuring tight legging boots with an even tighter mini dress on top.

Chaney’s spaghetti strap corset dress featured an incredibly plunging, lace-lined neckline that revealed ample cleavage. She opted out of any accessories and instead, left her long brown hair down in voluminous waves.

We couldn’t help but notice how much Chaney’s outfit looked like Kim’s recent outfits which are also head-to-toe pink Balenciaga looks. Just recently, Kim was out in LA when she wore tight pink Balenciaga Pantashoes with a tiny cropped zip-up Political Campaign hoodie sweatshirt, a sparkly pink Balenciaga Hourglass Bag, and Balenciaga Eyewear Cat-Eye Silver-Tone Sunglasses. She had her platinum blonde hair down and parted in the middle in loose waves and her tiny waist was on full display in the pants.

Aside from this pink look, how can we forget Kim’s skintight pink Balenciaga outfit that she wore after her SNL appearance? She wore a shiny metallic pink onesie with a massive feather boa jacket on top.

Chaney’s outfit comes on the heels of her confirmation that she and Kanye are still dating. After rumors started to go around that the couple had broken up after four months, Chaney commented on TMZ‘s Instagram post, “Please stop posting and spreading fake news about my relationship. Have some respect, it’s his birthday.”