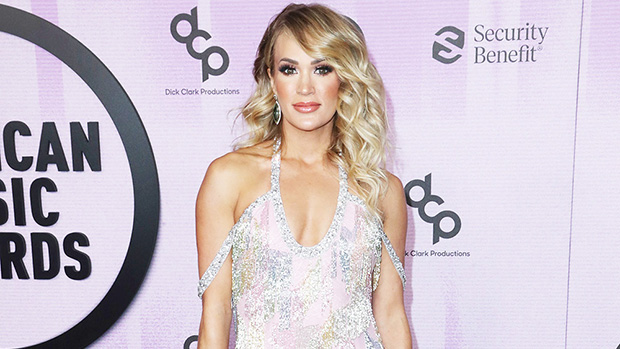 Carrie Underwood has “Blown Away” the competition at the 2022 American Music Awards just by showing up to the red carpet! The stunning 39-year-old country singer shimmered and shined her way down the red carpet on Sunday, Nov. 20 in Los Angeles in a gorgeous pastel pink dress that featured pastel-colored tinsel throughout by designer Tony Ward. The dress offered a low neckline, off-the-shoulder sleeves, and a super high slit on the right side that showed off her famously toned leg.

The mother of two curled her signature blonde locks and accessorized with sparkling rings and dangling earrings for her big night out. Rhinestone-covered open-toed heels completed her fun look. She also helped her eyes pop with dramatic black lashes, while taking it easy with neutral shades on her lips and face.

Carrie was nominated for two AMA awards this year, including Favorite Country Album for Denim and Rhinestones and Favorite Female Country Artist. Although she was certainly a promising contender, Taylor Swift, 32, grabbed both awards before the show even started thanks to Red (Taylor’s Version). Carrie is set to take the AMA stage once again to perform her second single off her ninth studio album, “Crazy Angels”.

Carrie’s performance and AMAs outing come in the middle of her The Denim & Rhinestones Tour, which kicked off on Oct. 15 in Greenville, S.C. and has dates through mid-March 2023. She’s currently on a break from the tour, with performances resuming in January. “And just like that our shows this year are over!” she wrote in a Nov. 20 Instagram post that showed her dancing with her opening act, Jimmie Allen. “Thanks #SanFrancisco for helping us end on a high note at the @chase_center !!! Already looking forward to getting back out on the road in 2023!!!”

Earlier in the month, Carrie lit up the carpet at the 2022 CMA Awards in Nashville, Tenn. in a layered baby blue dress that also featured a plunging neckline and high slit. Later on in the evening, Carrie sang her heart out to her second single off her album, “Hate My Heart”. She was nominated for three prized at the show: Entertainer of the Year, Female Vocalist of the Year, and Musical Event of the Year for her song with Jason Aldean, “If I Didn’t Love You”. While she did not take any trophies home, she was surely a highlight of the night with her powerful vocals and shimmering performance ‘fit!

Wizkid: 5 Things About The International Superstar Performing For The First Time At The AMAs