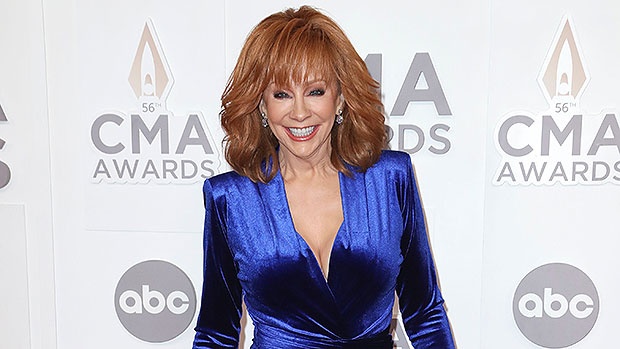 The queen of country music has arrived! Reba McEntire dazzled on the red carpet at the 2022 CMA Awards in a blue velvet gown. The dress paired perfectly with her iconic red hair.

Reba was joined by her boyfriend, Rex Linn. Rex looked sharp in a black suit and rocked a navy tie to match Reba’s blue gown. Reba was among the first set of celebrities to arrive on the red carpet.

Reba was part of the tribute to the late Loretta Lynn, who passed away in October 2022 at the age of 90. The country legend opened the show Carrie Underwood and Miranda Lambert. Reba changed into a black pantsuit with green fringe detailing and sang a touching rendition of “You’re Lookin’ At Country.” Reba, Carrie, and Miranda sang Loretta’s hit “Coal Miner’s Daughter” together.

Reba had her third outfit change of the night when she was presenting. She walked out on stage in a sparkling red dress with Rex to give out the award for Song of the Year.

Ahead of the CMAs, Reba actually had to go on vocal rest and cancel some of her concerts. “My doctor has advised me to go on vocal rest, so I have made the difficult decision to reschedule this weekend’s shows,” Reba wrote on Instagram.

Her Reba: Live In Concert tour may have hit a snag, but the “Does He Love You” singer has big plans for the new year. Her tour will be extended with 14 new dates, including a headlining show at New York’s Madison Square Garden.

Reba McEntire’s Kids: Everything to Know About Her Son & Stepkids

In addition to her tour, Reba is staying busy in front of the camera as well. She’s currently starring in the hit ABC series Big Sky and has a new Lifetime movie coming out next year titled The Hammer. But Reba has her eye on one TV series in particular: Yellowstone.

“They haven’t [reached out], but I would love that because I’ve always wanted to be in Westerns,” Reba told Billboard. “I’ve talked to Kevin [Costner] about it. Kevin and Rex [Linn] are close friends, they’ve worked together. But maybe one of these days, I’d love to be in a Western. I just love a new challenge.” Give Reba what she wants!