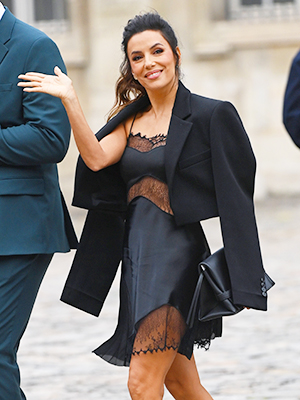 Victoria Beckham had the fashion world buzzing ahead of her Paris Fashion Week show on Friday, Sep. 30, 2022. Stars were definitely eager for another chic, understated collection.

The clothes weren’t the only thing people were talking about. Star watchers were on the lookout for Victoria’s son Brooklyn Beckham and her daughter-in-law Nicola Peltz. The fashion designer and actress were reportedly feuding after Nicola refused to wear one of her mother-in-law’s dress designs for her April wedding to budding photog Brooklyn.

Even without the newlyweds, it was a total family affair. Vicky’s husband David Beckham took children Harper, Romeo, Cruz, and his girlfriend Tana Holding from Paris’ La Reserve hotel to the fashion show on September 30, 2022. They were all looking sharp.

Ready for all of the VIP appearances? Click through the gallery for all the best looks.